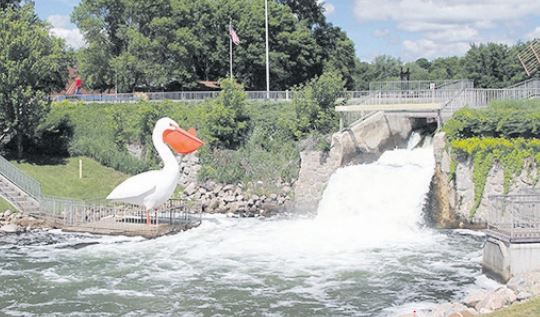 Minnesota’s “Pete” is the pelican to beat in the stakes for the world’s largest pelican sculpture Photo: “Jordy” Jordahl

News of plans to build a big pelican sculpture at The Entrance has unwittingly started a friendly rivalry with an American town.

Pelican Rapids and Pelican Pete have owned the bragging rights of the worlds largest pelican since 1957.

If plans for the pelican at The Entrance go ahead, the Central Coast will trump Pete by about a metre in size.

This is an excerpt from the story by Louis Hoglund published in The Press: “The claim to the worlds largest pelican” may move to the far side of the planet.

Pelican Rapids and Pelican Pete have owned the bragging rights since 1957, but now a proposal in an Australian seaside township could forever alter history by a few feet; or a metre or so if you speak Australian.

“The tall and short of the issue is a plan being considered by the Central Coast Council in NSW. Known as a feeding area for the Australian Pelican, the site has been a tourism attraction for birdwatchers.

According to newspaper accounts (Wyong Regional Chronicle, September 11), there is a small pelican statue there now, but Councillor Bruce McLachlan has proposed a larger figure, that would out-rank Pelican Rapids Pete. The Australian sculpture would be good for tourism but McLachlan has also suggested that the pelican statue could be used to promote environmental education and call attention to ocean pollution.

“Broadcaster Scott Levi put me on the air … and I offered a bit of historic background on Pelican river, rapids and lake and Levi offered up some history of the Australian pelican which is larger than our Minnesota white pelican.

“In fact, the downunder version of the big-beaked fowl is recorded as having the longest bill of any living bird. So in a real sense Australia may already have the claim to the largest pelican. The Australian plan, at this stage, is calling for an artistic, more aesthetically sophisticated sculpture.

“There’s nothing ‘artsyfartsy’ about Pelican Pete. He was created in a shed, by a couple of local blacksmith types; Anton and Ted Resset, and another local craftsman, Alvin Anderson, did the plaster work over the metal frame.

“Pelican Pete is a nuts and bolts, meat and potatoes creation. The story of the NSW plans to construct the largest pelican has gained global notoriety. The international Guardian newspaper carried a story on the subject which quoted, Jody Bowers, of Pelican Rapids, saying good for them, if they want to build it, I say go for it …. I dont think it would affect us too badly.

“Pelican Rapids actually has about three dozen Pelican Petes. In addition to our 15.5ft (4.7m), there are about 30 other pelicans scattered around the town and this menagerie of 4ft (1.2m) tall pelican figures were created in honour of the 50th anniversary of Pelican Pete in 2007.

I could go on with a multitude of reasons why Pelican Pete wont easily surrender his throne. It could be a wonderful rivalry, dont you think, mate?