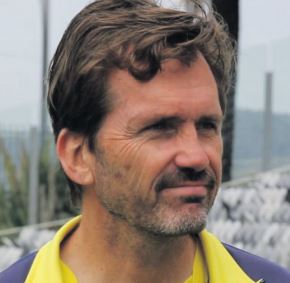 The Central Coast Mariners continue their baptism by fire with the sacking of Head Coach, Mike Mulvey.

The news that Mulvey had been dismissed broke in the early hours of the morning on March 10, after the Mariners most recent flogging at the hands of Wellington Phoenix during their Round 21 clash at Central Coast Stadium. A record low crowd of just 3,703 people turned out to watch the Mariners flail their way to an 8-2 defeat and unbeknownst to them, Mulveys swan song game. Mariners management advised of Mulvey’s fate via a media statement.

Mulvey leaves behind a legacy a far cry from what he promised when he famously declared the age of mediocrity is over at the Mariners 2017/18 end of season awards, with the club on track for their fourth wooden spoon in as many seasons and enduring the second worst A-League campaign ever recorded, with just one win in 20 matches. With the clubs reputation in shambles, Mulvey’s high profile recruits failing to impress, and established players either benched due to disciplinary issues (Matt Simon, Andrew Hoole) or doing their best to also part ways with the Yellow and Navy (Matt Millar), it seems the one constant at the Mariners is crisis.

During his brief tenure with the club, Mulvey copped a lashing from Mariners fans over player disputes, and rumours that he had lost the backing of the player base continued to dog him right up until his final game as Head Coach. With his departure however, fans are now asking themselves whether or not the blame should lie solely on Mulveys shoulders, and are turning their ire on club owner, Mike Charlesworth, over his role in the Mariners downward spiral.

Mulvey isn’t the only one who needs to go, one fan wrote in the public comment section of Mulveys final Mariners press conference, available on the Mariners Facebook page. Its not the coach, its the owner. No money to invest, no will to engage the community and happy to have the fans suffer year in year out, another fan wrote.

As painful as all this is, I agree with Mulvey on a lot of club issues, another fan wrote. We need stability. We shouldnt accept players breaking disciplines. We need to band together, but whether us fans and the FFA have the patience is another thing. I love this club. I hope we can get it right and give the next generation of Mariners something to cheer for. At what point does the FFA step in and apply the blowtorch to the Mariners?

I recall the Nix were made to fight for their licence several years ago and are now competitive after some money was spent on players. I keep watching and supporting our team, but its time the owner had the license stripped and given to someone who really wants to back the club and make them competitive again. Enough is enough, what can we as supporters of this once mighty club do, to bring about the change that is so badly needed?

Shame on the owner, Mulvey deserved better than that, another fan said. I have a lot of respect for Mulvey and always will, and before anyone can judge him, give him a chance to coach a senior, experienced and competitive team, and not a bunch of boys that are given to him because the owner doesnt want to spend dollars, and then have your say. And does anyone honestly think letting Mulvey go is going to fix the problem?

How many coaches have we gone through in the last six years? Has it changed anything? The answer is no because they are not the problem, another fan wrote. Club CEO, Shaun Mielekamp, did not respond to a request for interview prior to our publication deadline. Alen Stajcic has been appointed Caretaker Coach for the remainder of the season.