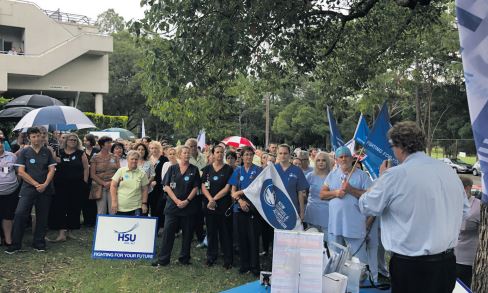 A rally of local health workers assemble to discuss the high prices of the new car park.

Gosford Hospital staff, the Health Services Union (HSU) and members of the Central Coast Labor team, held a public rally at Gosford Hospital on March 13 to protest the 71.6 per cent increase in hospital parking fees.

The rally coincided with the opening of the hospitals new $35.5m multi-story parking facility on Showground Rd, and saw around 150 hospital staff members descend on the grounds of the Health Services Building in protest of the new parking fee policy. HSU Central Coast representative and rally leader, Brendan Roberts, said the increased parking fees were a blatant cash grab. Staff have been paying $13.75 a week, but this is being jacked up to $23.60 week. This means staff will be paying an extra $40 a month to park on-site, and up to $1,230 a year, just to park their car at work, Roberts said. According to Roberts, the increased parking fee is effectively a $512 pay cut for many full time hospital staff. In the first 12 months of these new fees being introduced, health workers at Gosford Hospital will shell out up to $750,000 in parking fees.

Why should health workers hard earned wages be given back to their employer just to help pay back the loan for the new car park? he said. Hospital visitors and patients can also expect to shoulder a hefty increase, with parking tickets now costing anywhere between $9.90 (one hour) to $19.90 (five hours plus) a day, to park on site. Private car park operator, Secure Parking, has taken over managing and operating parking at Gosford Hospital. CCLHD has maintained that the price increase is in line with the NSW Health Hospital Car Parking Fees Policy, which had been developed in consultation with union representatives in an effort to rollout uniform parking fees across the state, but Roberts said this was blatantly not true, otherwise the HSU would not be opposing the new policy. Another key issue raised by hospital staff at the rally was the closure of the shuttle bus service that allowed staff to safely travel to and from the hospital from the commuter carpark on Showground Rd. One hospital staff member told Coast Community News that staff are at a loss of what theyll do now that these changes are in effect.

What many people don’t know is that the new carpark is not big enough to accommodate both staff and visitors, the nurse said. Staff are put on a waiting list to be allocated a parking space in both carparks. Theres currently a four year waiting list to even be considered for a space, its a joke. Without enough adequate parking at the hospital, staff are forced to park in the streets, and with all of the construction going on around the hospital, were competing with construction workers, nearby residents and visitors to the hospital for parking, the nurse said.

The nurse said the current situation had put the safety of staff at risk and that the cessation of the shuttle service would exacerbate safety issues further. Many staff members don’t feel safe walking the streets to get to their cars. Female staff members and night shift workers in particular have experienced all manner of threatening situations just trying to walk to and from their cars.

Many nurses have reported being assaulted or intimidated, and I myself even had someone try to force their way into my car whilst I was trying to go home. Just recently a staffer who parked at the Gosford Tennis Club finished her shift to find her tyres had been slashed. It is really not a good situation to be in, and many of us relied on the shuttle for that sense of security, the nurse said. Weve heard from staff members that would rather arrive up to two hours earlier than their shift, just to be able to park on site, and w’eve also just learned that any staff member lucky enough to get a parking spot in the visitor levels of the parking lots will be expected to pay the full days rate for the privilege of coming to work, Roberts said. Roberts also proposed a second rally and pseudo staff strike, to be held at the Showground Rd commuter carpark on April 1, to protest the closure of the shuttle service. I encourage staff members to join the HSU at the carpark for a rally and barbecue on April 1, which will not end until the shuttle bus shows up, Roberts said.

Liesl Tesch, Member for Gosford, David Harris, Member for Wyong, Emma McBride, Federal Member for Dobell, Anne Charlton, Labor candidate for the Federal Seat of Robertson, and Jeff Sundstrom, Labor candidate for the State Seat of Terrigal, all attended the rally, with Tesch, Harris and Sundstrom all pledging to back a number of HSU priorities currently being put to NSW Health, the most notable being the implementation of a flat $10 rate for staff to park at their health facility of employment. McBride and Charlton also addressed the rally and said they fully supported the implementation of a flat rate for staff.

The Central Coast Labor team are here today to support the HSU Central Coast campaign against the unfair hike in parking fees at Gosford Hospital, McBride said. Roberts concluded the rally by urging staff members to let their voices be heard on the contentious issue. We must stay strong and united until we get fair fees for everyone, Roberts said.

A spokesperson for the CCLHD told Coast Community News that hospital staff will be given a three month period of lower fees to adjust to the new policy.