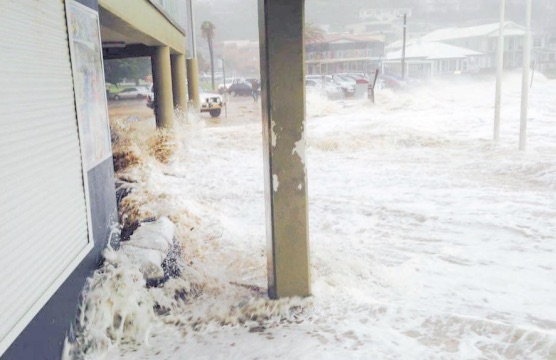 “The problem at Wamberal is that the landholders don’t want to contribute the $500,000 each needed to build the wall, even though it is to protect their private property. “They expect the rest of the ratepayers to cover the cost. “That would mean roughly, the rates of every 200 ratepayers would be going to save one waterfront landholder’s property. “That has been the problem at Wamberal for the past 20 years. “

Council has always been howled down when they say private landholders have to save private land, and the Council has to pay to save public land. “As you work your way down the Coast, as far as I know, there is no erosion problem that threatens houses at Avoca, then there are little bays that are not threatened with erosion, because they have headlands holding everything together. “Ettalong, Umina and Ocean Beach are being eroded, but planned retreat can only occur where there is no public infrastructure between your house and the ocean, or a lack of preparedness to build infrastructure.

“However, all along that coastline in those areas, there is a road between the houses and the beach. “There are virtually no houses not separated from the beach where it is eroding, by a road or park or reserve with public infrastructure. “Therefore planned retreat is not an option there either, because there is already public infrastructure, namely a road, with foundations and everything that goes with that. “There is no plan to abandon roads, so if you have a road between you and the threat, it is about the best thing you can have. “If the road stays, you stay, so planned retreat is virtually an option in no parts of the Central Coast.”

Asquith said that he did not believe low-lying areas around Brisbane Water, including Davistown and Saratoga, would be considered for planned retreat either. “Most of those houses front a reserve. “All along Davistown, there is a big public reserve that is all a public facility and it would not be abandoned. “There is nothing in the policy saying that if you get inundated four times a year, you will have to leave your home. “Council does not have the power to make you leave your home. “They don’t have any need to look at planned retreat.

“The thing the policy will do will mean that we start to take action to slow down climate change, plant more trees, build sea walls, do whatever we have to do. What the Council should do, in my view, is to be planning for change, as these areas are affected by flood levels, they should be adopting strategies to make the drains bigger, raise the road level, and call that adaptation. “You adapt and do what you can. “You can’t stop it, so you adapt to it. “Tell me, where are they planning planned retreat, because there is nothing in the policy about it?

Asquith said members of the older generations needed to think about the legacy they were leaving their children and grand children, and that plans needed to be put in place now to ameliorate future risks. “Councillors have been criticised for setting flood levels that are too high, but they are not too high. “It is a fact that on the Central Coast, with a South East Low, and a maximum storm surge, the amount the ocean is lifted with the low pressure air, is five metres plus the high tide, plus the flood waters, and flood levels set by Council need to reflect that. “I was in New Orleans earlier this year and had a good look at the storm surge they got from Hurricane Katrina, and they got a nine metre storm surge on top of a high tide.

“Some of the bridges, one huge bridge, were being demolished, one was way up in the air, but it was being demolished because people who had been on that bridge during Katrina were washed off and drowned. “There are exceptional circumstances, so you at least plan for those Proposed Maximum Floods of five metres, which are half of what New Orleans experienced in Katrina. “We were amazed that when we were more than 100 miles from the ocean, we went out on the Bayou and they were showing us boats that were ripped off moorings on the coast and dumped in the bayous, and they gave up trying to repair them and getting them back out to the ocean.” According to John Asquith, those on the Central Coast attempting to undermine the need for Council to plan for sea level rise, “are talking the thing down for their own private benefit.

“They are all older men and they won’t be around when the worst of it hits. “It is the younger generation who are going to cop the worst of this, and these people will be long gone and long forgotten. “They are running a scare campaign because Council is going through a very careful process to make sure people’s voices are heard. “Council are going through a number of steps before they have a draft policy, so I would suggest that people who have concerns should identify what it is that concerns them, and ask Council to explain and consider.” Asquith said plans needed to be put in place now, not in 50 or 100 years’ time.

“We cannot wait 100 years to try and turn around the processes that are already in place. “It is happening right now and we are seeing it every day, with stronger cyclones, much more instability in the climate, and it is easy to understand, because there is more heat, and heat is energy. “Two weeks ago, in north Queensland, we had rainforests on fire, and now we have the biggest cyclone we have had in 15 years. “Our thoughts should be focused on the legacy we leave, so if a person of 20 today is going to be seriously impacted over the next 40 years by climate change, it is going to affect their food supply.

“In NSW, we already have a shortage of grain. “This is the third year of drought in the wheat belt. “People of retirement age will see the impact on their children and grandchildren. “We inherited a planet that was functional when we were children, and we are leaving a legacy that our children and their children will not be able to turn around in their lifetime. “The job we have got is more than looking after ourselves. “Think of the legacy you are going to leave, whatever age you are. “You can see the effects that climate change are going to have on the rest of your life. “The scientists are saying that if we don’t act in the next 10 years, we are not going to keep temperature rises under two degrees, and they have identified a two degree rise as one that would see systems go out of control.”