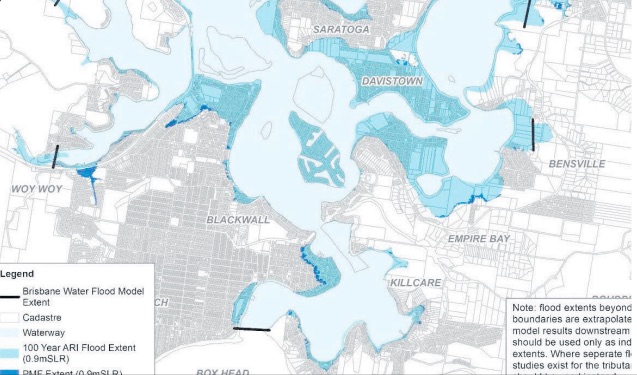 The exhibition of Central Coast Council’s draft climate change policy has been delayed until February, but Mayor, Jane Smith, has cautioned the community not to believe “misleading” messages about the policy’s intent.

Landowners, who believe they will be negatively impacted by the strategy, have already met to kick start their resistance to what they consider to be key elements of Council’s approach. Pat Aiken, Secretary of Coastal Residents Incorporated, said 120 people attended a meeting at Davistown RSL on Saturday, November 24, to discuss the rights of home owners in areas of coastal vulnerability. Discussions at the meeting were based on the premise that the idea of “planned retreat” has been embedded in Council’s draft climate change policy.

A new website, intended to kick-start a community campaign to oppose the Council’s draft approach to climate change, has also been launched. Mayor, Jane Smith, said the discussion at the meeting and the content of the website did “absolutely not” reflect the intent of the draft policy. “My reading of that website is that it is designed to be quite alarmist,” Mayor Smith said. “It doesn’t capture the fact that the draft policy is a high level policy that includes a whole suite of strategies that Council will investigate further,” she said.

“My view is that Council, at this point, needs to have all options available for consideration, but planned retreat is not the primary option. “It is in one section of the policy along with five other options Council is likely to consider. “That section itself looks at reviewing and updating the sea level rise planning levels and then it talks about how we then look at developing appropriate strategies to respond to those projected sea level rise planning levels. “It looks at six options in total. “I am keen that we do go out and have that conversation with communities.

“I am a fan of what Lake Macquarie Council has done in developing adaptation plans, and developing those plans with a lot of community ownership. “Once people understand the issues and the options, it is the community that has come up with the plan for the future.

“At the moment, we have an online survey available, and that closed on Friday, December 7, so we are very keen to have as many people as possible complete that survey about their attitudes on climate change. “The survey allows them to express interest in being part of the five workshops that we will be running next year. “The formal submission period will be in February.” When asked whether she believed the intent of the website and whether the Davistown meeting was political and designed to discredit Council, Mayor Smith said: “It is disappointing that may be what is behind this website. “Certainly, what is clear at all levels of government, and we are seeing the current UN conference in Poland calling for and stating very clearly, that we need action on climate change and we need action at all levels.

“We need business and community to come together to look at how we mitigate and adapt. “The current State Government has a policy in place, and an aspirational target of zero net emissions by 2050, so I think what Council is doing is beginning work to align with our current State Government,” Smith said. Those at the Davistown meeting were told that coastal hazard threats have been part of the history of the Central Coast that have not stopped the region from adapting and growing.

Presenters outlined the potential impact of Council’s proposals on landowners, including sterilisation of land from future development via Development Control Plans and notations on planning certificates attached to contracts for sale that could damage the property’s market value. The meeting was told that SES could refuse to protect homes in certain vulnerable areas and that home insurance could be refused, making it impossible to get a home loan. Aiken said he explained how planned retreat impacts negatively on a property’s value and that owners cannot protect their homes by, for instance, building revetment walls. A website, called tellcouncil. com has been launched as “the voice of ratepayers and residents on the Central Coast”.