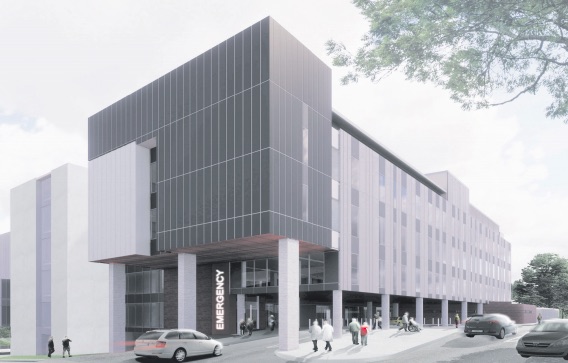 Designs have been unveiled for the Wyong Hospital redevelopment. Member for Terrigal, Adam Crouch, Parliamentary Secretary for the Central Coast, Scot MacDonald, and Member of the Legislative Council, Taylor Martin, unveiled the designs on December 3.

Crouch said the designs give the Central Coast community a first glimpse of the expanded infrastructure being delivered in the region. “The $200m redevelopment of Wyong Hospital will significantly enhance healthcare on the north of the Central Coast, providing our community with greater access to services closer to home,” Crouch said. “Because we’ve built a strong NSW economy, we’re able to provide the health infrastructure and services that our community needs. “With redevelopments at Gosford and Wyong, more than half a billion dollars is being invested into public hospitals on the Central Coast,” he added.

MacDonald said the designs would give the Wyong community an early look at the Hospital that will be serving them for the coming decades,” he said. Martin said the designs show that the redeveloped Wyong Hospital will be a first class facility. “The redeveloped hospital is an amazing facility that will feature the latest in technology for the comfort of patients, staff and visitors,” Martin said. “The hospital redevelopment is significant as it will better serve the existing population and position itself for future population growth,” he added.

When complete, the redevelopment will deliver an increase in overall service capacity with both the development of a new services building, and the refurbishment of some areas of the existing hospital, including: A new and enhanced Emergency Department; Enhanced intensive care services; Improved medical imaging; Enhanced paediatric outpatient and short stay unit; Increased inpatient beds; Increased operating theatre capacity; Additional car parking; and, Increased medical day unit ambulatory service.