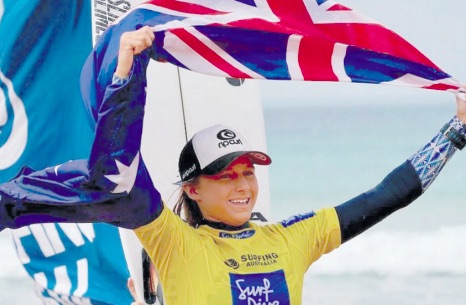 Molly Picklum, Joel Vaughan and Hugh Vaughan, all took out their age brackets to give North Shelly a virtual clean sweep of the competition. The AJS Title caps off a massive year for Picklum, who took out bronze during the 2018 VISSLA International Surfing Association (ISA) World Junior Surfing Championship, and the 2018 Woolworths NSW Junior Titles. Picklum went into the AJS as a favourite, and quickly cemented herself as the competitor to beat in the Girls Under 18 event.

She blew away the competition during the opening heat, scoring 13.50, the highest individual score of all 20 competitors in the heat. Picklum then pipped the field again, posting the highest score in the Under 18’s quarter finals, with a 14.10, the highest individual score again. In the semi-finals, Picklum made it three from three, posting a 14.75. She saved her best for the final, pulling out an unbelievable 17.25, to take out the Title. Vaughan didn’t fare as well in the opening round of the Under 16 Boys, and was bested by fellow NSW competitor, Mike Clayton-Brown, in the opening heat. Luckily, Vaughan still posted the points he needed to qualify for the quarter final, and he put on a massive display, pulling out a huge 15.10, to take out the quarter final.

Vaughan’s fine form continued into the semi-finals, where he again showcased some masterful surfing to claim the round with a 15.15. He kept his momentum in the finals, overcoming, Clayton-Brown, to take out the Title with a 15.90. Young guns, Nate Hopkins and Hugh Vaughan, were standouts in the Under 14 Boys. Both boys breezed through their opening heat and set impressive scores, with Vaughan posting a 13.75, and Hopkins setting the highest score of the heat with a 17.00.

The boys kept the pace in the quarter final, with Vaughan finding his fire to post a solid 12.25. Coming off the back of his massive opening score, Hopkins didn’t need to do much to stay in contention, and posted an 11.50 to take out his quarter final round. In the semis, the pair were up against each other. Vaughan had found his rhythm, posting the score of the round with a 15.10, securing his place in the final. Despite his impressive display in the opener, things didn’t work out for Hopkins, who posted a 9.50, ending his run at the Titles. Vaughan went on to claim the Under 14 Boys Title with a 14.75.