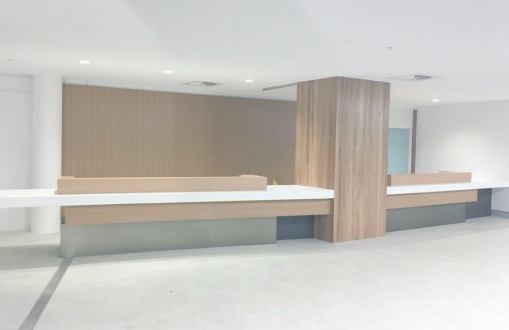 Gosford Hospital workers have voted to shut down the new temporary Patient Enquiry counter until continuing safety concerns are addressed.

The counter closed from 7am, on December 18, after workers took the extraordinary action of issuing a Cease Work notice under the Work, Health, Safety Act 2011. Health Service Union (HSU) NSW Secretary, Gerard Hayes, said hospital workers were frustrated at the failure of management to put in place simple security measures. “Hospital management have been dithering on this issue for several weeks, and now we are back at square one again. “Workers have had enough, and they just want something to be done about it,” Hayes said.

According to Hayes, temporary arrangements, including extra security patrols, were put in place in late November. “These arrangements are set to ceased on December 17, leaving staff vulnerable to abusive, drug affected or mentally ill patients,” he said. The Patient Enquiries desk is staffed from 7am to 9pm, seven days a week, with a staff member on their own from 4:30 to 9pm week days and 4 to 9pm on weekends. A petition calling for protective screens at both the interim and new Patients Enquiry counters has already gathered over 200 signatures. “The CEO of the CCLHD, told staff that their safety and wellbeing was paramount,” Hayes said. “In reality, however, workers feel that their safety and wellbeing is treated as a low-order priority. “Workers should not have to wait until there is a serious incident before something is done to make the Patients’ Enquiry desk safe and secure,” he said.

In a media statement CCLHD CEO, Dr Andrew Montague, said the Patient Enquiry counter was a part of the hospital’s main entry refurbishment. “Staff have been involved throughout the Main Entry design process and continue to have the opportunity to provide feedback and input,” Dr Montague said. “The new patient enquiries space has been designed to be more open and welcoming, improving access and communication with patients, visitors and staff. “Patient enquiries have been temporarily relocated to the new tower and the opening of the new patient enquiries desk has been postponed until March, 2019, while consultation continues.

“Risk assessments were carried out by CCLHD Security and also Work Health and Safety experts, to ensure that the redevelopment met all the required safety and security standards for public spaces in hospitals. “A $583,000 Emergency Department’s Security and Duress Alarms Upgrade was completed at CCLHD in December 2017. “The security workforce at Gosford Hospital has also been boosted with additional staff rostered on each shift. “The District is committed to ongoing consultation with staff and representatives of the HSU around the safety of the public areas, including the possibility of installing additional CCTV cameras in the reception area. “The safety and care of our staff, public and visitors is always our top priority,” he concluded.