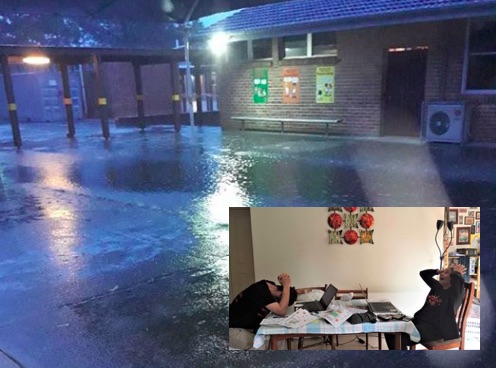 The organising committee of the Woytopia Sustainable Living Festival hopes to reschedule the rained-out event before the end of the year.

It was due to be held on Sunday, October 14, at Woy Woy South Public School but was cancelled due to flooding on the site. Event manage, Mr Mark Mann said, “We are looking at rescheduling but it is too early to announce any details. “We are sorting out the most workable date and venue and there will be an announcement shortly on the Woytopia website and Facebook page,” Mr Mann said.

“We had said we would go ahead even with the wet weather and we had moved a lot of things under the covered areas of the school, under the Covered Learning Area and into the hall,” he said.

“The cover meant our heads were not getting wet but the rain filled the gutters and drains and overflowed so we were standing ankle deep in water. “We had to make the decision at 6:30am and then, after we’d cancelled, it stopped raining. “We considered clearing the site and starting at 12pm but by then we would have been half-way through the event,” he said. “We decided it was not practical or safe to set up the site,” he said.

The Woytopia Festival takes place every second year but Mr Mann said the organisers were also looking at making it annual. Woytopia celebrates sustainable living on the Woy Woy Peninsula with green talks, gardening workshops, presentations and an eco market. It is run by the Peninsula Environment Group.

Woytopia to be held on October 14