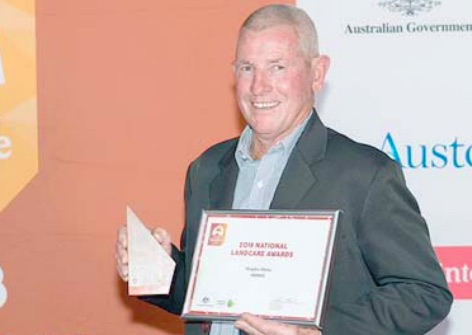 Clean4Shore received the most votes of 65 competing projects in an online poll in the lead-up to the awards ceremony. Clean4Shore leads up to 70 fi eld trips a year, engaging the community, schools, disability, indigenous and business groups in the removal of litter and debris from around the Hawkesbury River, Brisbane Waters and Tuggerah Lakes. Clean4Shore facilitator Mr Graham Johnson said he was excited to win the award.

“I’m very proud that land-carers have voted for litter management. “I have a great support group from my Facebook page, and from people that follow our program and are willing to get out there and do something about the litter in our waterways.” During the competition, Mr Johnson had called on his followers to demonstrate their support by voting in the on-line poll. “For us, this is a pretty big achievement. “It makes it all worthwhile,” he said. The People’s Choice Award was one of 11 presented during the National Landcare Awards ceremony.

It was the only one decided by the public and not a judging panel. Mr Johnson said volunteer groups led by Clean4Shore remove garbage from waterways while simultaneously educating themselves about the Central Coast foreshores and mangroves. Corporate partners attending Clean4Shore fi eld trips have also learnt about the effects of marine litter. This growing awareness has been refl ected in evaluation reports, corporate feedback and Fundraising, Mr Johnson said. Landcare Australia chief Dr Shane Norrish commended Mr Johnson. “It’s an honour to present the People’s Choice Award as it showcases who in the Landcare community has made the biggest impact on the Australian public,” he said.