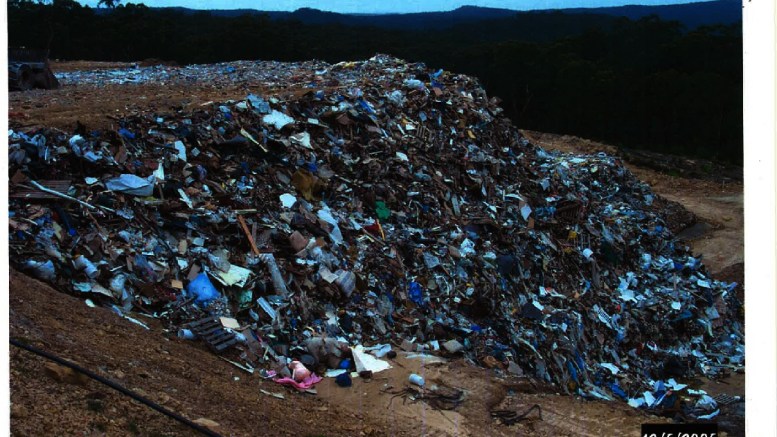 The Mangrove Mountain landfill, approved for clean fill in 2005. Archive 2005

The NSW Minister for the Environment, Danielle Upton, has failed to support a recommendation for an independent inquiry to investigate the operation, regulation and approvals of the Mangrove Mountain landfill.

The recommendation was one of 36 made by the Energy from Waste Technology Parliamentary Inquiry, and one of the 27 recommendations not supported by the NSW Government. The NSW Government response to the recommendation for an independent inquiry said: “The site is regulated through a Development Consent and an Environment Protection Licence. “The development consent provides the approval for the activity and the Environment Protection Licence sets the operational controls. “The landfill has not received waste since 2014, and this matter is now before the Land and Environment Court to determine,” the response said. Central Coast-based Member of the Legislative Council, Taylor Martin, said “I know that there remains significant angst among Mangrove Mountain locals due to the presence of a landfill site on top of the Ourimbah Creek system.

“There remains questions regarding the Mangrove Mountain landfill site, including licence variations and the role of the then Gosford Council in issuing development consent,” Martin said. “I note that the Minister has not ruled out an independent inquiry, however with the matter now before the Land and Environment Court, I believe we can expect to see these questions resolved, and the community protected,” he said. Stephen Goodwin from Mountain Districts Association (MDA) said the Government’s response was impossible to understand. “What astounds MDA is that the decision demonstrates a complete lack of understanding of the Mangrove Mountain Landfill issue and its history,” Goodwin said.

“Who is advising the Premier? “What is going on? “In declining to act, the NSW government noted that the landfill…matter is now before the Land and Environment Court to determine,” he said. “The current court case referred to in the Government response, and any inquiry that might be held, are two separate matters. “The court case is simply about getting approval for the environmental protection licence to enable the landfill to reopen for business and its future operation. “The inquiry is an examination of the events of the past that led to this mess, to determine how they happened, and to identify any statutory failings that could be rectified to prevent a similar mistake from happening again.

“The Government’s own environmental regulator, the EPA, recently acknowledged that the landfill represented a potential environmental risk. “Who then provided the advice to the State government that resulted in it turning its back on the opportunity to hold a credible independent inquiry? “Mangrove Mountain Landfill sits in the catchment of the Central Coast water supply. “This is an issue that crosses the political divide and Coast voters, no matter how they normally vote, will reject the government for this decision to ignore a threat to their water supply.

“The final report had the support of all parties, including local Liberal MLC, Taylor Martin, a member of the Inquiry Committee, who recently made a speech reiterating his support for an inquiry into Mangrove Mountain Landfill. “Central Coast Council has strongly supported the call for a Special Commission of Inquiry into this contentious landfill. “Anyone can see that the issue needed to be addressed, so what possible reason could the Berejiklian government have for turning its back on it? “We would hope that Council responds with a strongly worded protest to the NSW Government,” Dr Goodwin said.

NSW Greens’ Environmental Spokesperson, Cate Faehrmann, said the government’s response was “disgraceful” and showed “nothing but contempt for the community. “The inadequate response to the fiasco that the Mangrove Mountain landfill site has become is yet more proof of the Liberal/National Government’s complete disregard for our environment and communities,” Faehrmann said.

“The Central Coast community has been crying out for action against the landfill operators for years, and the government has once again given them nothing. “This is a kick in the guts for members of the community who have worked tirelessly to raise awareness of the circumstances surrounding this landfill site and the impact it has on local residents and the environment. “Residents have never been given adequate opportunity to have their say and the lack of transparency surrounding the approvals, in particular, deserves thorough scrutiny. “What is the government hiding from? “We need a thorough, independent investigation into the Mangrove Mountain landfill site.

“The community has put up with too much already in relation to this fiasco and it’s time they got answers.” A spokesperson for the Central Coast Greens, Wolfgang Koerner, said the response was not only inadequate, but irresolute and unhelpful. “The substantial risks to our regional water supply, the apparent regulatory failures and the absence of any suitable planning approval is in clear contradiction to the Minister’s assertions,” said Koerner. “Like many community groups, the Central Coast Greens have reached out to government Ministers and backbenchers to seek support for a Special Commission of inquiry. “We have yet to receive a reply. “Due to sustained pressure through local campaigning, Central Coast Council and all but one elected representative from our area have joined the call for an inquiry.

“It’s time the government listened too. “The constraints of the court’s limited jurisdiction mean that an investigation of the landfill development’s genesis from an erstwhile golfcourse remodelling project to the present EPA approval for some 2.7 million tonnes of general waste will not be conducted. “Central Coast residents have never had the opportunity to have their say on this development since the original Gosford Council approval, which provided for a mere 80,000 tonnes of clean fill to extend the existing Memorial Golf Club golf course. “The Central Coast deserves frank answers to a long list of questions, and today’s response from the government is of no assistance.

“This situation does not lessen the common commitment of our region to protect our shared natural resources, retain some semblance of control over development here and have our government agencies respond to us with accountability and transparency,” Koerner said. In a letter to Central Coast Councillors, Koerner, who is also a member of Council’s Mangrove Mountain and Spencer Advisory Group, said: “It is abundantly clear that the current Land and Environment Court case between Verde Terra (the landfill operator) and the EPA NSW, and which Central Coast Council is seeking to join, has no potential whatsoever to ‘determine the matter’ to the satisfaction of Central Coast residents. “In view of this development, it would be completely appropriate for Central Coast Council to renew its call to the NSW Government to establish a Special Commission of Inquiry into the Mangrove Mountain Landfill, irrespective of any separate court actions by parties with an interest in the landfill development.”