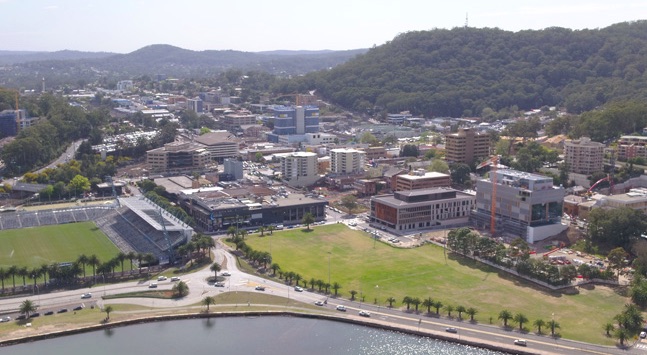 Mayor Jane Smith said she was extremely disappointed that the NSW Government did not appear to have taken on board many of the community’s concerns, and only a few of Council’s concerns, about its new planning controls for Gosford’s CBD.

When Council met on Monday, October 8, it discussed a number of key concerns regarding the Gosford City Centre Development Control Plan (DCP), that had been in a formal submission to the Department of Planning from Council’s expert planning staff. However, on Wednesday, October 10, after Planning Minister Roberts announced he had signed off on the new Gosford CBD State Environmental Planning Policy (SEPP) and DCP, Mayor Smith said she had not seen a final version of the new controls.

“My feeling, without seeing the final document, is that they have not taken on board many of Council’s major concerns,” she said.

“I continue to have significant concerns about the number of developments that will be made State Significant Developments, where the controls in the new DCP may not be applied. Mayor Smith said she had met with representatives from the Department of Planning on Tuesday, October 9, but they had not been able to satisfactorily answer her questions about how development applications would actually be processed under the new rules.

“I received some information that because the State Government is the consent authority, they will have some staff in the local office, but Council officers will still be preparing some documents and doing some of the work. “The State Government is still to decide whether it will make any contribution for the cost of work done by Council, and what is clear, is that the relationship is confusing and undefined. “I asked what would happen if a development on a Key Site was also a State Significant Development and they did not provide an adequate answer. “

So even though the Minister has said the new controls will be gazetted, there are still unanswered questions about the process,” Smith said. The submission prepared by Council’s expert staff raised concerns about solar access controls, protection of view corridors, built form controls including height and floor space ratio, key site controls, Gosford waterfront controls, car parking, and heritage and signage in the Gosford CBD. On October 10, Mayor Smith said she was still concerned that none of those signifi cant fl aws in the new planning controls would be addressed before they were activated by the Minister. Council also expressed concern that planning guidelines in the DCP may not apply to large sites.

Mayor Jane Smith said Council was committed to working collaboratively with the State Government to revitalise Gosford City Centre and Gosford Waterfront as key destinations and attractors for business, local residents, visitors and tourists. “Our community have told us through the Community Strategic Plan that they want a growing and competitive region with a vibrant commercial hub and capital in Gosford,” Mayor Smith said.

“There has been a lot of confusion about what these changes will mean for development in the Gosford CBD, and the community need to know and understand the detail of these changes,” she said. “We want a City Centre that caters for everyone in the community, whether you are travelling to Gosford for work, recreation, entertainment or business.

“Council has over $1.79b of approved developments in the Gosford CBD area, and Council is paving the way for the revitalisation of the city centre.

It’s vitally important that these planning controls build on this foundation and the planning initiatives serve to complement rather than confuse the long term, sustainable advancement of Gosford as the regional capital of the Central Coast.”

Councillors voted in favour of a motion from Mayor Smith, which included asking CEO, Gary Murphy, to write to the Department of Planning, recommending that the Department not include major sites in Schedule 2 of SEPP (State and Regional) 2011. The resolution also requested that land zoned B6 be excluded from the larger site provisions included in the new planning controls, another change that does not appear to have been taken on board by the Department.

Smith said sites along Racecourse Rd would be able to be developed without specified height or floor space controls, if B6 sites were included in the new controls. “The application of the new larger site provisions initially did not specify what zonings larger sites applied to and that is still not fixed,” Smith said. Council also called for the Department of Planning to acknowledge hat the waterfront was not restricted to the Broadwater, but included areas now considered to be part of City South.

Mayor Smith said errors and confusion in the draft planning documents that had been placed on exhibition included the definition of the waterfront being confined to the Broadwater. Council’s call for the new SEPP and DCP to be re-exhibited, as a result of the errors in the earlier drafts and confusion caused, was also not acted on by the Department.

“There has been quite a bit of confusion and misinformation in the draft documents that have been exhibited,” Smith said, commending Council staff on their submission. “If you read the staff submission, it also highlights that there are a whole lot of issues that have not been clarified through the documents on exhibition.”

A comment made by Clr Greg Best at Monday’s Council meeting appeared to ring true by Wednesday afternoon: “We have no power here do we?” Council’s Director of Planning, Scott Cox, replied: “Correct, we are just making recommendations in a submission to the draft DCP”.

A link to the State Government’s Planning for Gosford is here.