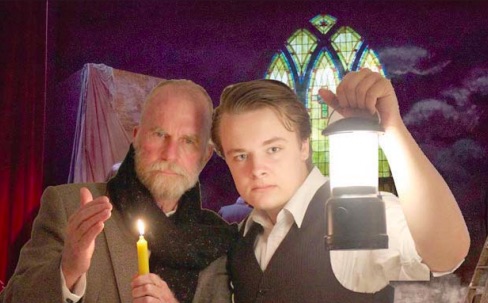 Paul Russell and Declan Dowling starring in the Woman in Black

Tickets have almost sold out for the Gosford season of the acclaimed stage adaptation of Susan Hill’s best-selling novel, The Woman in Black.

Local theatre stalwarts David and Shea Wicks are bringing the play, which enjoyed the second longest run in the history of London’s West End, to the Don Craig Room at Laycock Street Theatre from August 23 to 25. The adult ghost story stage play was described as “The most terrifying live theatre experience in the world” when it played in London. “My wife hated the line believing we’d scare more people away from the theatre than bringing them in,” Wicks said. “I consoled her by suggesting we’d have trained nurses in attendance at every performance,” he said. No strangers to community theatre, David and Shea Wicks ran the successful Holiday Coast Theatre Company in Coffs Harbour in the early 90s, both have enjoyed the buzz again some 25 years later in bringing The Woman in Black to the Central Coast. Wicks said the play’s 28-year West End run was “amazing. “Well, not really when you consider what an amazing piece of theatre The Woman in Black is,” he said.

He said the story, plot, characters and staging just “jumped out at me” when he first read the play 18 months ago. “One of the smaller independent theatre companies here announced they were staging it late last year. “I was curious and followed through seeking to audition. “But then nothing more was forthcoming except they had ‘postponed’ their production. “Whatever the reason, I’m so grateful to them for introducing this play to me. “I followed through and bought a script. “I couldn’t put it down as I imagined the young Kipps becoming engulfed in the old, dark house with strange noises, glimpses, things half seen, the quicksand in the marsh waiting to take the innocent. “This is the scary stuff everyone thrills to as they grow up,” said Wicks. Then there was a cast to find. “I knew we needed to attract the best actors possible,” he said. “I knew I’d be spending a lot of pre-production time to arrange the marketing, posters, sponsorship, a 16- page program and planning the smoke and mirrors.” He said he was very lucky with just two telephone calls.

The first was to Declan Dowling, an up-and-coming young actor who was first noticed by the Wicks’ in Gosford Musical Society Juniors’ production of The Little Mermaid a few years ago. Since then, Declan has gone ahead in leaps and bounds with what he now hopes will become a full-time career. Last year he was awarded the 2017 City of Newcastle Drama Award for Excellence in a Male Actor Under 18 Years. Wicks said he only had one actor in mind to play Old Kipps, the traumatised man who recruits a young actor to help him exorcise the ghost of the Woman in Black. “I called Paul Russell, a brilliant actor with decades of experience, and nervously asked if he’d be interested in doing a play together in 2018. “He asked, ‘which play?’ and I told him,” said Wicks, never expecting the response Russell gave. “The Woman in Black is sensational,” Russell said. “I would be very interested in playing the old man and I’d love to audition.” “I simply said ‘congratulations Paul you’ve just successfully auditioned for the part’,” said Wicks. Tickets for the six performances went on sale in May and response has been strong. “For the fi rst time we have reserved seating in the Don Craig Room and the Gosford season has all but sold out.” The Woman in Black is also being staged at the 500 seat Art House theatre in Wyong.

‘Love is Love’ at The Art House

Special holiday show and workshop for young inventors and creatives