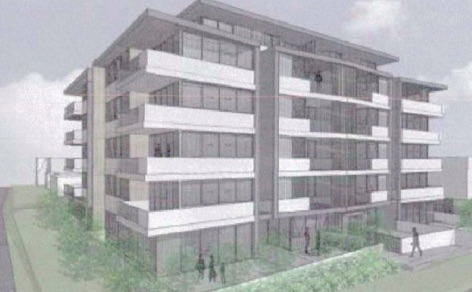 Member for Wyong, David Harris, has addressed NSW Parliament to express his concerns about an affordable housing development proposed for 6-10 Dunleigh St, Toukley.

“I raise an issue that was brought to my attention by, Adele Sands, who lives in Toukley,” Harris said. “She has made some very good points about a proposed development in that area,” he said. “It rang alarm bells as soon as I saw it. “Toukley is an area consisting of single dwelling houses. “A local developer has consolidated some blocks and wants to build a four-storey, 34-unit development. “The brand-new area of Warnervale, which has a lot of greenfi eld development, is zoned low density, that is, single and two-storey dwellings, but the older suburbs are being rezoned to medium density, which is changing the fl avour of those communities. “This is such a proposal. “There are some issues with this proposal.

“The developer had to withdraw the original application and submit an amended development application [DA]. “However, it has not changed signifi cantly enough to address the issues raised in the submissions from local residents. “There are some signifi cant issues in the area. “One that has been highlighted is that the development is very close to the Beachcomber Hotel. “The hotel attracts large crowds to events, but unfortunately the patrons often engage in unsavoury behaviour outside the hotel. “This is not the fault of the hotel, which has employed many staff, but when patrons start walking home, it is very hard to control them. “A few years ago, there was a murder across the road from the hotel, which upset the local community significantly. “The developer wants to build this block of units virtually opposite the Beachcomber Hotel, even though on Friday and Saturday nights, there is already pressure on car parking in local streets.

“There are significant traffic and safety issues. “The developer’s own crime risk assessment report, conducted by Barr Property and Planning, which was submitted with the DA, states that the overall crime risk rating for the project has been assessed as high, due to the characteristics of the area. “The developer is acknowledging already that it is building in a high-risk area and will potentially put vulnerable people into a recognised high-risk area. “The issue of parking has not been addressed at all in the amended DA. “In fact, the amended DA proposes fewer parking spaces. “Public transport in the area is limited and unreliable. “Anyone who knows the area, would know the main road of Toukley. “There is only one way in and out and traffic must cross the bridge. “There are already traffic issues there.

“Most dwellings these days have one or two vehicles, so we could expect 60 or 70 cars and, at the very least, 35, one per unit. “The allowance is certainly for fewer cars than that. “Tamar Ave cannot support two-way traffic as it is a single-lane street. “Further, it cannot support cars parking on one side of the street unless they park on the grass verge or median strip. “A nursing home is due to be built backing onto Tamar Ave. “The report attached to the approval for the nursing home states that Tamar Ave could not be used for entry or exit to the development. “The report says, ‘The existing condition, width and form of Tamar Ave is poor, narrow and suited to local access only’. “So the report on the development right next door to the proposed housing acknowledges the traffic problems around Tamar Ave.

“To be more specific about Council’s own planning, I note that the proposed development application does not fall within the objectives of the medium residential zoning. “The objectives of the R3 zone are to provide for the housing needs of the community within a medium-density residential environment; to provide a variety of housing types within a medium-density residential environment; to enable other land uses that provide facilities or services to meet the day to-day needs of residents, which is why the aged care development will be built there, and to maintain and enhance the residential amenity of the surrounding area. “This development certainly does not do that. “There are a whole lot of issues with this development. “In other areas, like Ryde, there is a moratorium on these sorts of developments.

“Members on the other side of the House have asked for a moratorium on developments in their electorates. “I ask that there be a moratorium in areas like these and that higher-density developments take place in the newer areas,” he said. Councillors may be given the opportunity to make their own submission to the Joint Regional Planning Panel regarding this proposal for a boarding house at Toukley. Councillor Doug Vincent has given notice that he will move a motion at the August 13 Central Coast Council meeting for CEO, Mr Gary Murphy, to refer the assessment report for the Dunleigh St DA back to Council before it is considered by the Joint Regional Planning Panel (JRPP). If Clr Vincent’s motion is supported, Council will then determine whether it will make its own submission to the JRPP in relation to this DA. The JRPP has not yet set a date to consider the DA.