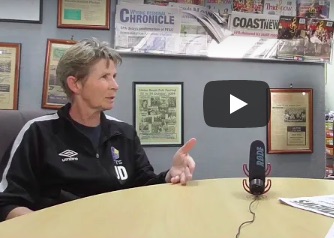 The Central Coast Mariners are ready to rejoin the W-League, as soon as the Football Federation of Australia (FFA) gets the competition right, according to former Matilda, Julie Dolan OAM. Dolan agreed to help the Mariners campaign for a Central Coast side in the national women’s football league.

In the latest Central Coast Newspapers Video News interview, Dolan said that women’s football is now one of the fastest growing sports in Australia. Its popularity is reflected in the increasing number of girls enrolling at the International Football and Tennis School at Kariong, where she works. “It is one of the fastest growing sports on the back of all the success and all the exposure of the Matildas so it is a great opportunity to grab hold of that momentum and build the game and that starts at grassroots.

As for the FFA’s deferral of inviting the Mariners’ back into the W-League, Dolan said: “It is in their policies to have a W League team associated with every A-League team. “What they have to do is get the competition right so they are able to accommodate the extra teams.” Dolan said if the FFA’s concerns were about diluting the talent base or losing overseas players due to the season getting longer, they needed to “think outside the box”. “Why not have some Wednesday night games to fit the competition in within the same time period?” she said. The absence of a W-League side on the Coast means the most talented young women footballers are lost to the area, she said. “As usual they either go to Newcastle or the head down to Sydney and we lose the talent and until we get our own team that will continue to happen,” she said.