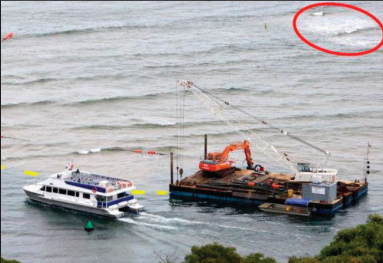 The Peninsula Chamber of Commerce has welcomed the start of dredging operations in the Ettalong Channel with works due to be completed in around six weeks’ time.

“Dredging works have finally started after numerous delays due to transport problems with the heavy equipment and adverse weather conditions”, according to Peninsula Chamber of Commerce president, Mr Matthew Wales. “Operations started adjacent to Lobster Beach and have now moved out to the main channel. “Around 20,000 cubic metres will be removed from the channel and pumped about 300 metres to the opposite side on the main shoal”, Mr Wales said. “This is a major operation that will cost the NSW State Government around $600,000 in emergency funds so as to ensure that the channel is once again navigable.

“To the State Government’s credit, the additional funds above the $250,000 promised is in recognition that this is an important issue to the local community. “Many local businesses have suffered considerable loss of income with the sharp decline in visitors from the Northern Beaches which has impacted on jobs and business viability. “It is hoped that within two to three weeks the Ettalong Channel will again be safe enough for Palm Beach Ferries to recommence operations”, Mr Wales said.

“The Chamber has also been advised by the NSW Department of Industry that improved levels of cooperation have arisen with the Central Coast Council in relation to future funding of dredging operations and the delivery of a long term solution to the channel issue. “The importance of this third transport link to the Northern Beaches of Sydney cannot be understated with over 200,000 passengers travelling between Palm Beach and Ettalong Beach each year. “We will continue to work closely with both the NSW State Government and the Central Coast Council to ensure that the channel problem is solved and that key operators like the Palm Beach Ferry service can operate in a safe and profitable manner,” Mr Wales said.

Popular cruise is cancelled as channel silts up

Mehan stands by criticism of council