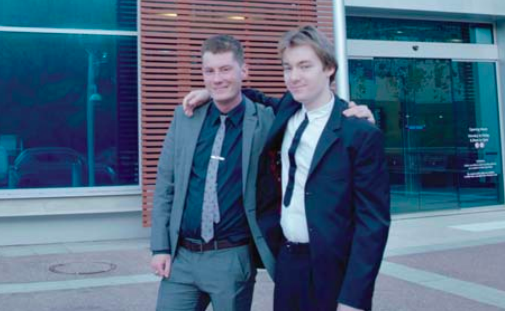 Stemming from 1960s and 80s revival music and culture, The Odd Mods have created a band encapsulating the “modernist” genre including the style and dress.

They are one of many acts performing at the Winter Blues and Jazz Festival around The Entrance and Waterfront Plaza, from July 13 to 15. “The Odd Mods have been a project since 2013, but we’ve known each other for around eight years,” The Odd Mods bandmates, Henry Thorpe and William Perry-Hancock, said. “This is our first proper festival, we’ve done a smaller festival which was an opener for Steve Kilbey (from the band The Church),” Mr PerryHancock said. Cobey Linsley, Team Leader, Events Place Activation, Central Coast Council, said the festival is run during winter to bring more tourism and interest back to the Coast. “Nowadays, music is more commercial and less about the art,” Mr Thorpe said. “Our music is a mix of revival, jazz, blues, ska, RnB, all sorts of things, and with our band, we’ve just incorporated all the stuff we normally play anyways into this ‘odd mod’ music,” Mr PerryHancock said. “The Who are the ultimate Mod Band, and one of our biggest influences,” Mr PerryHancock said. “We are so honoured to be performing on stage.”

Work on dredging of The Entrance Channel is underway