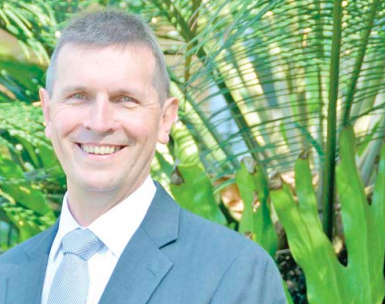 Mr Gary Murphy, Central Coast Council’s new permanent CEO, was officially welcomed to the Coast by a unanimous vote at the July 9 Council meeting. Mr Murphy had been in the role for just over a week, taking over from Acting CEO, Mr Brian Glendenning.

Mayor Jane Smith said Mr Murphy had the full support of the Council. She said his leadership, experience and passion for community made him the ideal choice. “We need an experienced CEO who will deliver stability and certainty for the Coast, and we have found that,” Mayor Smith said. “I look forward to working with Gary and delivering our first ever Community Strategic Plan,” she said. “I thank Brian Glendenning and the executive team for their outstanding leadership as we have transitioned to this period of the elected Council and a new CEO.” Mr Murphy met with the Wyong Regional Chronicle on the preceding Friday, and said that his first week had been hectic, with back-to-back meetings.

“I realise there will be a honeymoon period, but people have seemed outwardly pleased to meet me,” he said of attending his first Central Coast Council pop-up at Bay Village Shopping Centre, Bateau Bay. “I think there is, from staff and the community, a mix of optimism and expectation that a permanent CEO will bring stability and the ability to move forward as one Coast,” he said. Mr Murphy said he would be looking at the internal structure of the Central Coast Council which is one of the largest in NSW. He said it was a requirement to have a structural review within a year of a local government election under the Local Government Act, and he would have discussions with Mayor Smith.

Council currently has vacancies for the Chief Financial Officer, Chief Information Officer, and one director’s position, due to the retirement of Mr Mike Dowling. “So we have the opportunity and the ability to make changes,” he said. “I am not a person who makes changes for change’s sake, and any change must be designed to support the implementation and delivery of the Community Strategic Plan,” he said. There will be a report to Council about any proposed restructure by September 30, he said. Another requirement of the amalgamation was no job losses for three years.

Mr Murphy said his approach to dealing with any changes to employee numbers or roles would be to work closely with employees and unions from the outset. “I want to reach out to the unions before I even start the process,” he said. Mr Murphy said his view was that the full amalgamation of the two former Councils was “still ongoing and will be for quite some time”, particularly in the pulling together of areas like information technology.

In terms of job numbers, Mr Murphy said Council did have vacancies and would be looking to improve efficiencies. In terms of the community perception that the administration period had resulted in a significant separation of the elected Councillors from staff, Mr Murphy said in a pure sense, as defined in the Local Government Act, the elected Councillors have a strategic role, “they set the policies,’ he said. “I am their only employee and I have to deliver their policy objectives, but they do tend to want to venture into the operational space because that is where they feel comfortable and they have a desire to understand how the organisation functions, and that is one way councillors can satisfy themselves,” Mr Murphy said. “It is natural that they may have some concerns, based on past history, that past practices may be continuing, and that is a journey we have to go on.

“The new Councillors and Mayor are still finding their feet, in this first stage, we have new Councillors on a very steep learning curve in a huge organisation,” he said. Mr Murphy said he believed that, like many high-level state government documents, the Central Coast Regional Plan 2036 was a “land use document”. He said it was essential for both the community’s and Council’s voice to be acknowledged and heard, and the role of the Council clear. Mr Murphy acknowledged the Central Coast was a region sandwiched between two major cities, and had often been overlooked as a result. “The challenge is to balance the size that we now have, with not compromising our values and the attributes we love,” he said.

Mr Murphy said he was waiting to be fully briefed about the legacy issues of the two former Councils including the Wallarah II coal mine and the future of the Warnervale Airport. “I have spoken to the Mayor and Councillors about the need to put processes in place for those issues to be dealt with effectively, so they don’t result in us operating with one hand tied behind our back. “From my perspective, some of those issues have complex legal histories, so we need to add a systemic approach and not deal with them in an ad hoc way.

“There needs to be a process followed so there can be a conclusion and they are not left lingering, they need to be closed down,” he said. Mr Murphy said the first impressions of the community and his staff had been positive. “I found the community to be very responsive and the staff are professional and passionate about the Central Coast,” he said. He said he was hoping to address any instability within the organisation and believed he had a very good platform to build from. “The State Government is also making all the right moves and noises in terms of trying to develop the region, both in terms of human development and financial development, and we need to seize that opportunity,” he said.