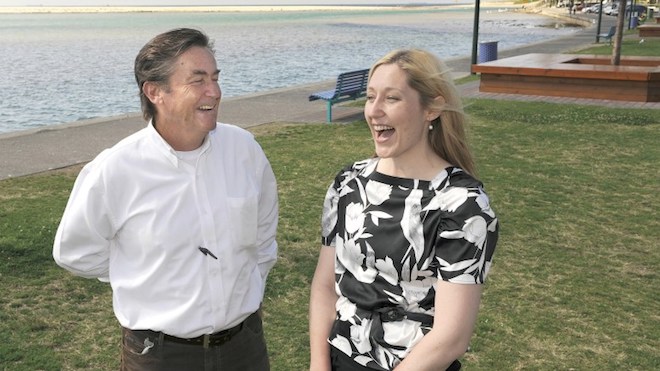 Grant congratulating Emma on her election to Wyong council in 2008 Picture: Peter Clark

Federal Member for Dobell, Emma McBride, will launch the Grant McBride Memory Walk on Saturday. September 8, in Long Jetty, in memory of her late father.
Supported by State MP’s, David Harris, Member for Wyong, and, David Mehan, Member for The Entrance, Emma McBride will raise funds for Dementia Australia.
Grant McBride was State Member for The Entrance from 1992 to 2011.
He passed away in February, at 68, after living with younger onset dementia for over five years.
Emma McBride hopes that the Grant McBride Memory Walk will raise awareness of dementia in the community, particularly younger onset dementia, and also much needed funds for Dementia Australia.
“On the Coast, we have about 6,000 people living with dementia, and that number is expected to reach 14,000 by 2050,” she said.
“Dementia affects those living with it, as well as their carers, family and friends.
“I am patron of the Central Coast Dementia Alliance, which formed in 2017 to make the Coast a more dementia-friendly community.
“We are working to raise awareness, reduce stigma, and support people living with dementia and their carers,” she added.
Emma McBride said that she hoped the Grant McBride Memory Walk would be supported by everyone in the community with an interest in dementia and positive ageing.
“Memory walks started in 2004, and now bring together tens of thousands of people each year.
“I urge everyone to sign up and join in the race against dementia,” she said.
The Grant McBride Memory Walk will start and finish in Saltwater Creek Park, Tuggerah Pde, Long Jetty.
Walkers and runners can choose a 7km, 4km or 1km course, and are encouraged to gain sponsors.
More details about the event are available on Emma McBride’s website.