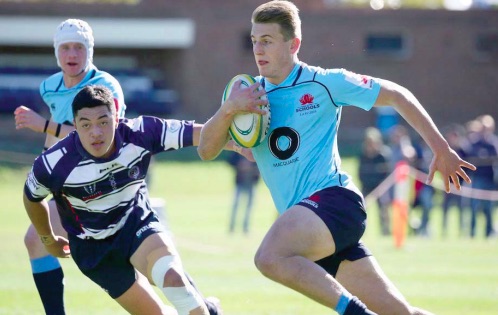 Wadalba’s Joey Walton is one to watch

Wadalba Community School student, Joey Walton, has been featured in one of rugby union’s most enduring publications, The Rugby News. Walton has been turning heads at the Australian Schoolboy Trials (AST), and was interviewed by Rugby News on July 11.

The NSW Schools’ centre is turning heads for a second straight year at the Australian Schools Championships. “I started playing rugby when I was nine for the Warnervale Wildcats, and I’ve played there ever since, in juniors and now in grade. “League is pushed pretty hard in my school, but I’ve always preferred rugby, and have just focussed on that,” Walton told Rugby News.

Walton was relatively unknown heading into last year’s NSW Schools’ trials, but starred for Combined High Schools (CHS) against their more fancied GPS rivals. That was enough to earn the then 16-year old a spot in the 2017 NSW I squad, but he still wasn’t done yet. “I had no expectations last year, I really just enjoyed the opportunity of getting to play in a sky blue jersey. “Obviously, after the tournament, I wasn’t named in any of the schoolboys’ squads, so I just went away and worked on my skills and kept training hard. “Then out of the blue, I got the call-up into the Australian Barbarians’ squad.

“It was a real honour. “I was the only CHS boy, so it was a bit lonely at the start, but it was a really enjoyable experience,” Walton said. Despite the talent of their star pupil, rugby still isn’t played at Wadalba Community School and Walton thinks we’d see a lot more CHS players in sky blue and gold jerseys if that trend started to change. “We had our CHS trials in Dubbo this year, and there was plenty of really impressive talent out there,” he said. “The Waratah Cup and Waratah Shield are really important, I think.

“It’d be good to see more public schools play in those tournaments. “My school has never played in it, but hopefully we’ll see that change,” he added. Walton, who was a part of the NSW I squad during the AST’s has returned to the Coast a champion. In the grand final of the ATS it was an all blues affair, with NSW I facing down NSW II for the championship. Walton and his teammates stormed away with the win, 29- 19, to be named the Australian Schoolboy Championship Team for 2018.

Ourimbah cements position at the top