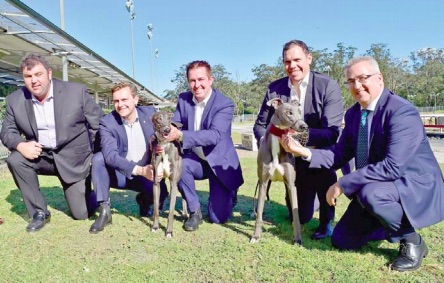 Greyhound racing will return to the Central Coast thanks to a $762,000 upgrade of the Gosford greyhound track funded by the NSW Government.

Minister for Racing, Paul Toole, visited GosfordShowground on July 10 to announce the project, the first under the $30m, five-year program, to improve safety for dogs. “The NSW Liberals and Nationals Government is securing the future of greyhound racing on the Central Coast through this project,” Toole said. The funding announcement will pave the way for greyhound racing to return to Gosford after racing was suspended earlier this year. It will include remediation of the track, installation of a new safety rail, an upgraded irrigation system and a variable speed motor lure.

“These innovative improvements will make Gosford one of the safest tracks in Australia and enable the sport to grow on the Central Coast,” Paul Toole said. Greyhound Racing NSW CEO, Tony Mestrov, welcomed the funding announcement. “GRNSW worked collaboratively with Gosford Greyhounds to request the funds through the government’s grant program to secure this great outcome for the racing community,” Mestrov said “This project will ensure that greyhound racing can grow on the Central Coast, while at the same time ensuring the welfare of dogs and the sustainability of the sport.” Greyhound Racing NSW is developing design standards for its racecourses based on research by the University of Technology, Sydney.

David Mehan, Member for The Entrance, welcomed the news that the NSW Government was funding the upgrade. “Not so long ago, this Liberal State Government wanted to shut this industry down, forever. “The track has not been in operation since February 2018, due to safety concerns, which resulted in Greyhound Racing NSW suspending racing at the Gosford track until measures could be taken to ensure that the welfare of the dogs could be maintained at all times. “This much needed funding and promised future funding will help to responsibly sustain this popular sport that has been in the public eye over the last few years,” Mehan said. “I will continue to support the greyhound industry and the many people in this sport who are genuinely committed to see reforms established which will safeguard the welfare of the dogs,” he added.