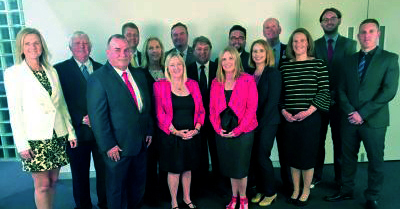 Councillors were asked to act as trustees for a trust that has no audited documents. Mayor Jane Smith deferred a vote to adopt amended terms of reference for two trusts of the former Gosford Council, and Central Coast Greens have indicated that they intend to place their “protective shield” around the trusts.

Mayor Jane Smith deferred a vote to adopt amended terms of reference for two trusts of the former Gosford Council, and Central Coast Greens have indicated that they intend to place their “protective shield” around the trusts. Former Central Coast Council Administrator, Mr Ian Reynolds, attempted to wind up the Protection of Environment Trust (POET) and the Gosford Foundation Trust, via a Council resolution but did not proceed, following receipt of legal advice. Central Coast Greens Member, Mr Wolfgang Koerner, speaking on the future of the trusts, said: “If it was put to me that there are apparent deficiencies in the management of this trust (POET), I would have to come to the conclusion that it was not managed in accordance with either its deed, or statutory obligations, under the Income Tax Act and NSW Charitable Trusts Act.

“This puts the current trustees, being the Central Coast Councillors, in an invidious position, because they are being asked to take oversight of the trust when the state of affairs is unclear, audited accounts can’t be produced, and they are being asked to consider certain changes to its operation, for example, its terms of reference,” Mr Koerner said. “When it comes to trusts and other charitable organisations who have, as their purpose, to protect the environment, support science and education, we [The Greens] feel obligated to ensure that these trusts and other organisations enjoy some protection from poor administration, from being dissolved when there is no cause, or otherwise their capacity being reduced in any way,” he said.

“We are interested in seeing that these kinds of facilities, which are to the public benefit and in the public interest, operate well, and be seen to be operating well, and be known to be effective and worthwhile. “So we would like to hold our protective shelf over organisations and trusts like this, which includes making inquiries and making representations to regulators and trustees.” Mr Koerner said the Greens would “most certainly” like to see the POET put back on its feet. “We believe the $10,000 worth of legal advice the former Administrator received would have told him that to dissolve these trusts and transfer the assets into Council’s own assets was not that straightforward … and any resolution by the Administrator to proceed with the dissolution of POET could have been met with a challenge in the Supreme Court of NSW by representatives of residents of the former Gosford local government area who are the beneficiaries of these trusts.

“I would have to come to the conclusion that it was not managed in accordance with either its deed or statutory obligations.” – Wolfgang Koerner, Central Coast Greens

“The motion that was on Council’s agenda papers attempted to streamline the day to day running of this trust without really addressing the underlying issues. “After a number of Councillors asked and raised questions in their capacity as trustees, it became apparent that the motion, as it was put on the agenda, could not proceed, and that the underlying issues with these trusts needed to be addressed first,” Mr Koerner said. The management committees of both trusts met on May 8. As an outcome of those meetings, Council staff recommended that Councillors adopt amended terms of reference for the two trusts’ management committees. However, when Central Coast Council met on June 12, Mayor Smith said the amended terms of reference needed to be discussed more by the trust management committees. POET was formed in 2006 as a perpetual charitable trust, and donations to it were allowable deductions under the Income Tax Assessment Act 1997.

It was formed, in part, due to the plan of management put in place for the Somersby Industrial Park, to enable Somersby landholders who could not develop their land to sell their holdings to the trust and earn tax credits. Funds belonging to POET had to be dealt with “in such a way that there is meticulous compliance with the Act, so that tax deductibility for donations to those funds is ensured,” the POET Trust Deed said. “The Trustee must deal with donations by crediting them to two separately administrated parts of the Environmental Organisation’s funds – a Public Fund to which all deductible donations are credited, and a Trust Fund to which all other non-deductible donations are credited,” the Deed said.

The Deed said: “The Management Committee shall comprise persons who are either Councillors or employees of the Council, and those persons may also be members of the management committee of the Public Fund.” The current membership of the POET management committee is one Councillor (vacant), CEO or delegate, and three community representatives (one vacant). The POET Deed specifies that another management committee of no fewer than three will administer the Public Fund. “Qualified persons” could be members of both committees, but the Deed also defined “qualified” as people with honours (OBE, KCMG, AO etc), clergy and church authorities, trustees or board members of a not-for-profit school or college, justices of the peace, judges or magistrates, public servants, barristers or solicitors, doctors, accountants, persons holding public or elected office, directors of large public companies, academics or teachers,etc.

POET currently has one management committee only and it is not clear whether that is responsible for the Public Fund, the Trust Fund or both. According to the Trust Deed, its Trustee (the elected Councillors) was required to provide statistical information on donations to the Public Fund within four months of the end of the financial year. “An audited financial statement for the Environmental Organisation and its Public Fund will be supplied with the annual statistical return,” it said. “The statement will provide information on the expenditure of Public Fund monies and the management of Public Fund assets.”

Clause 26 of the Trust Deed also said: “The Trustee must, at the expense of the Trust, cause the financial statements of the Trust Fund to be audited at least once in each accounting period by an approved auditor.” The Trustee had to open a separate bank account for the public fund, to be named, Gosford City Protection of the Environment Public Fund, which was to receive all gifts of money or property.

Another Trust Fund was to be established for non-tax deductible gifts and transfers with its own bank account. Before the agenda item was deferred at the June 12 Council meeting, Clr Louise Greenaway said she felt she should “know a little bit more about what the trusts involve. “I wanted it deferred until Councillors are provided with copies of the trust deeds, audited accounts and legal advice,” Clr Greenaway said. Mayor Smith said some of those matters were things that the trust committees would be discussing further. “As a trustee, I would like to see the trust deed,” Clr Greenaway said.

Mr Koerner said Central Coast Greens, and NSW Greens Member of the Legislative Council, Mr David Shoebridge, had lodged a GIPA application with Council to access all financial reports, including auditors’ reports and a range of other information but had been granted access to very little information. “My sense, partially resulting from the GIPA response, is that there is more to see because documents and information that would normally be available in similar circumstances are not available here, so the impression one gets is one of matters and circumstances being concealed or unavailable to be disclosed for reasons that are not clear,” Mr Koerner said.

“We believe, or information that has been given to me suggests that the trust has in its possession or has rights to, as many as nine properties, but that is unconfirmed. “We have no details of where the land holdings are, but we understand they are not confined to the Somersby Industrial Estate. “The sum has been mooted of a total estimated value of $1.5m, and that may include the land holdings,” he said. Council provided a one page document showing the amount of funds held in POET at June 30, 2017, as $490,639. “It is unclear whether the $490,639 is in one of the two accounts, and whether the other account holds a further $1.5m, including rights over assets. “We don’t know what the sums are in either of the two accounts.

“We have not been able to establish that two accounts have been maintained, and the response to our GIPA would suggest that there are not two bank accounts. “Instead, what it would suggest is that the accounts are held within Council’s own accounting system.” Mr Koerner said he understood audited financial reports “do not exist”. “I intend to request from the Commonwealth regulatory authorities, the Ministry of Environment, copies of any reports lodged for POET. “It is a requirement under the Income Tax Assessment Act, and because the existing situation is that environmental trusts are still regulated by the Minister for the Environment, the reporting goes to the Minister, who then passes on a copy to the Treasury.

“I have checked and confirmed that POET is currently registered as an environmental trust with the Minister of the Environment, and so we have to assume that one way or the other, Council has managed to maintain the eligibility for tax deductibility, or that otherwise, it is an administrative oversite on behalf of the Department of Environment, so that is something to be confirmed with the Federal Minister. “Down the track, all registered environmental organisations are understood to be transferred over to Treasury, under reforms to the Australian National Charities Regulator. “Available information suggests that process is currently in train.” As for winding up the former Gosford Council’s trusts, Mr Koerner said the POET “trustees are empowered to wind up the trust in certain circumstances, as long as they can transfer the assets and the purpose of the trust funds to a similar or matching fund acceptable to the Supreme Court.

“It is interesting that, keeping in mind that POET is a separate entity to Council and its assets, liabilities, income and expenditure are separate to that of Council, Council should seek to bring the administrative process under the structure of Council. “I would think that the trustees are ultimately being asked to consider whether that is appropriate, or whether POET, and other trusts, should have a structure of management of their own that accords with their respective deeds. “The approach Council seems to have taken would suggest that Council considers this trust and its assets as being part of Council’s assets and Council’s day to day operation, which would be erroneous.