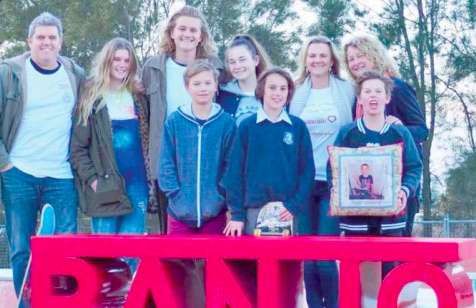 The skatepark is located at Terrigal Lagoon Reserve and was named in memory of the Pilon’s youngest son, Banjo, who lost his life at just 10-years-old in a skateboarding accident in 2015. The skatepark has been six months in the making and serves as a hub for young skaters from across Forresters Beach, Wamberal, Terrigal, Avoca, Copacabana and Erina. “It was a beautiful morning with the family and some of Banjo’s mates getting the first ride,” Mr Mic Pilon said. “Fletcher decided to claim the first injury with a broken wrist.

“We came back that afternoon to see 50 plus happy souls enjoying it all. “Such a surreal experience watching it all unfold,” Mr Pilon added. The park is also slated for a special grand opening event on August 5, which coincides with Donate Life Week, a movement the Pilons are passionate about, and also the third anniversary of Banjo’s passing. Banjo’s big brother and Australia’s Got Talent 2016 winner, Fletcher Pilon, will perform at the opening along with his sister Gabby, and a line up of local talent, including: Sam Busker Jones, June and Trinity Young, Ellie Drennan, The Button Mushrooms and Greg Gould.