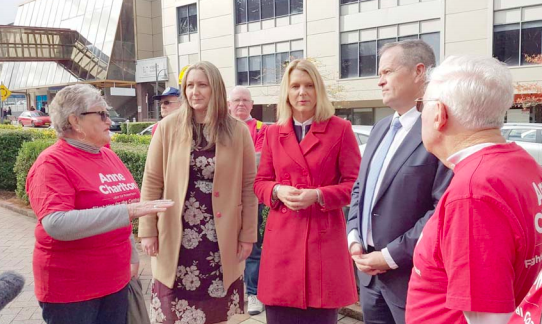 Mr Shorten, accompanied by Labor’s candidate for Robertson, Ms Anne Charlton, said commuter parking would also be expanded at Woy Woy and Tuggerah stations, as part of a national policy initiative. He said a Labor Government would spend $15m on the provision of additional commuter parking in major centres, and chose Gosford to announce the rollout of his party’s park and ride initiative.

“Thirty thousand people make the commute from one of the fastest growing areas in Australia, but we make it hard, and the government makes it hard just to catch the train,” Mr Shorten said. Mr Shorten said the plan would “make sure there are 1,000 extra car spaces across these three very busy areas on the Central Coast”, to help residents “get on with their lives without fuss and bother”. Ms Charlton said the initiative was a result of feedback from residents who have been forced to park on suburban streets and at shopping centres. Ms Charlton said station carparks reportedly have been reaching full capacity by times as early as 6:30 am.

“I’ve been speaking to people… and not only is there the inconvenience of finding a Council fine under the windscreen wiper of your car, and the walk back to the car, but at night time, it’s not always safe,” said Mr Shorten. The proposition hopes to alleviate the strains placed on the one in four Central Coast residents who commute by train. Mr Shorten said, if elected, his government would cooperate with Central Coast Council, the police and local engineers to ensure the project was successful. He said the national Park and Ride Fund would see $300m spent nationally on commuter car parking at key public transport hubs. When asked about whether a Labor Government had any plans to create more employment opportunities in the area, to reduce the need to commute long distances, Mr Shorten said: “The project is an illustration of the bigger point…one of our strategies is to help make apprenticeships a viable pathway for young people.

“Even on these projects, we’ll be specifying that one in 10 people who work on the construction of these projects has to be an apprentice,” he said. He said a Labor Government would also create more local employment opportunities through developing renewable energy and tourism infrastructure in the area, as well ensuring some medium to small businesses have access to cheaper finances. He said he was persistent that his job was to “focus on the policies which affect “It begs the question, did Council respond to the 2017 request from the EPA? ‘Mountain Districts Association is aware of the strong community interest in this issue, not just in the Mountain Districts, but by concerned residents of Gosford and Wyong, who are aware of the threat posed by the Landfi ll to their drinking water supply and groundwater. “MDA is following this Court action with concern.

“It does not want to be shut out of the process again,” Dr Goodwin said. The NSW Auditor General’s damning performance audit report, ‘Regulation of Water Pollution of Drinking Water Catchments and Illegal Disposal of Waste’, reported that deficiencies identified meant the EPA could not be confident that it conducted compliance and enforcement activities consistently across the state, and that licensees were actually complying with their licence conditions or the Act. It also found that the EPA does not monitor the consistency or quality of its regulatory activities conducted across the state. Another finding was that the EPA cannot be sure that correct licence conditions have been set for discharges into water catchments.

The EPA’s unreliable detection practices, and weaknesses in its governance approach, limits its effectiveness to consistently apply regulatory action, according to the report. “Given our finding that the EPA does not effectively detect breaches and noncompliances, there is a risk that it is not applying appropriate regulatory actions for many breaches and noncompliances,” it said. “The EPA did not achieve the strategy target of a 30 per cent reduction, over four years, in instances of large scale illegal dumping”, including on the Central Coast. “The EPA does limited monitoring of its performance in protecting the environment. The Auditor-General made seven recommendations to address the EPA’s deficiencies.

“The only way these recommendations can be addressed is if the current Minister is not in charge of implementing them,” Ms Sharpe said. “This report has found that NSW’s environment protection agency cannot fulfil its basic functions – functions that the community relies on to protect our environment and human health,” she said. “When an agency does not know how much pollution is going into our waterways, when the quality of our drinking water is declining, when illegal dumping is increasing, and when clear breaches or deliberate pollution are occurring, and the agency is doing nothing, it is time for the Premier to step in.” The first directions hearing for Verde Terra v EPA is set down for July 20, in Sydney.