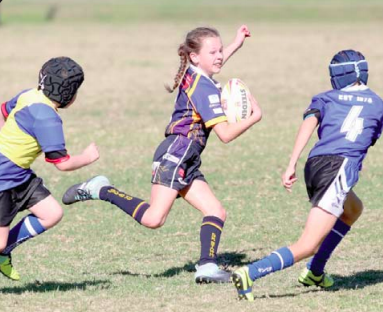 Kellie Hodge goes for a scamper during the Gosford U10s loss to Budgewoi.

Under the stewardship of newly appointed coach, Mr Shaun ‘Bellamy’ Martin, the Gosford Kariong Open Grade team turned on the razzle dazzle early to lead at the break, before ultimately running out of steam against the third place Tigers.

Round 10 of the Central Coast Rugby League kicked off under a welcome blanket of blue, after the two previous Sunday’s had been washed out. The Storm’s senior team was keen to recommence its audacious charge toward a semi-final spot, as they sized up the Entrance Tigers at Bateau Bay. A try to powerful prop, Jayden Stanley, after just six minutes, had the visitors jumping, and yet, despite being the better team throughout the opening 35 minutes, Gosford Kariong would only lead by two at the break. The second period refused to fall kindly for the Storm, trailing by just four with a quarter of an hour left to play, the third placed Tigers were able to run away with a 26-8 victory.

Despite his team appearing to run out of puff late in the game, Mr Martin was encouraged by the performance, on a day that served up far more positives than it did negatives for the men in purple. A hat-trick of long distance tries scored by Gosford Under 12’s dummy half, Benji KeeneO’Keefe, was the highlight of the Storm’s 34-6 win over Kincumber in Round 9 action of the Central Coast Junior Rugby League. In two other games played at the Club’s Narara home ground; the Gosford Kariong Under 15 (2’s) maintained their unbeaten start to the year with a 50-10 victory over the bottom placed Toukley, while an under-strength Storm Under 11(3’s) kept hold of top spot on their competition ladder via a hard fought win against Woy Woy.