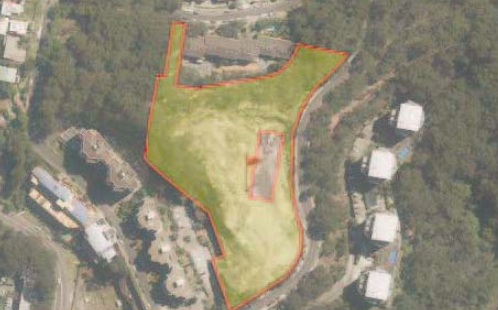 [Gosford] A $90 million development application has been lodged with Central Coast Council to build 299 residential flats, over three stages, at 87 and 89 John Whiteway Dve, Gosford.

Stage 1 will consist of site preparation and earthworks. Stage 2 will include construction of residential fl at building blocks A, B and C, with a total of 185 units and basement parking for 440 cars. Stage 3 will include blocks D and E, with a further 114 units and 183 car spaces in basement 2. It will also include construction of a communal swimming pool. According to the development application, the flat building(s) will have between four and six storeys and a gross floor area of 26,754 square metres. The site is unoccupied and has been cleared of vegetation. It formerly operated as the Gosford Quarry, evidenced by large sandstone cuttings and obvious signs of sandstone extraction.

The former Gosford Quarry has recently been proposed for heritage listing, mainly due to its relationship to the development of Gosford and a prominent local family. Gosford Quarries was established in 1922, and grew to prominence from the 1930s until WWII, under the directorship of Mr Henry Parry. The company was the dominant supplier of grey sandstone to the building market in NSW between 1922 and 1975. The site is not formally protected by any heritage listing, but Council can request an assessment of the potential impacts under the EP&A Act. A previous DA had already been approved and commenced for the development of the site, but was considered outdated, so a new application was prepared.

The overall breakdown of residences across the five proposed buildings would be 38 one-bedroom units, 232 two-bedroom units and 14 with three bedrooms. According to a traffic report submitted with the DA, “The total proposed provision of 623 spaces meets the minimum requirements set out in the Apartment Design Guide for all stages of the development. “Motorcycle and bicycle parking is also provided in accordance with the minimum requirements set out in the Council DCP. “Taking into account the estimated traffic generation from the proposed development, existing traffic flow conditions and speed environment, no significant traffic impact was found at any of the nearby intersections.

“The traffic and parking assessment conclude that the subject site is suitable for the redevelopment of the site in relation to the impact of traffic, vehicle access, parking and safety considerations. “The development is considered to have a negligible effect on the safety and operating outcome of the surrounding transport network,” it concluded. A single access to the basement is proposed near the south of the site on John Whiteway Dve. The site has been identified by Central Coast Council as bushfire prone. “The proposed development is located at the top of an escapement,” a bushfire report said.

“It is noted that, the bushfire hazard to the southeast, where theoretically, the greatest bushfire threat occurs, is within a narrow strip and only provides a fire run of 100m towards the site to the south and 200m to the south east, of which provides 60m of up slope influence and within damp riparian/rainforest areas. “The proposed development will include any necessary upgrades to the water main into the subject site to supply a new hydrants system, hose reels and internal sprinkler systems. Theoretically, the greatest bushfire threat and subsequent BAL rating is to the south of Block A.

“The vegetation posing a bushfi re threat provides a short fire run and the modelled radiant heat exposure is deemed to be an overestimate of the potential fi re behaviour. “Due the nature of the high rise development, further compliance would be required through concrete floor and roof areas, concrete or masonry external walls, and concrete or masonry internal walls between apartments/ units, fi re rated internal walls between units so that they will have internal fire separation, and even if one or more units are compromised, there will remain safe refuges inside the units until the bushfire passes and the outside area becomes tenable.

“Given the large number of residents/people associated with the development, a Bush Fire Emergency Management and Evacuation Plan should form part of the condition of consent of the approval,” the bushfire report said. Council has not yet published a Statement of Environmental Effects on its website and the Joint Regional Planning Panel has not listed the development on its website.

Can’t see the attraction of living in Gosford centre