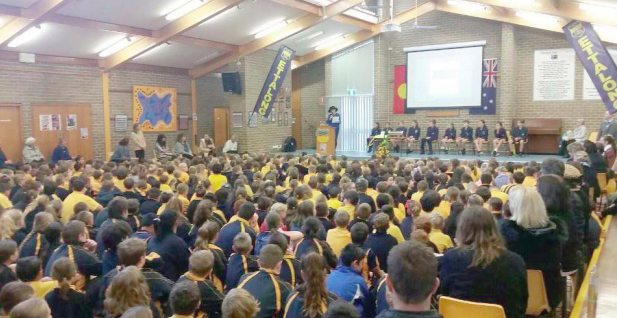 Ettalong Public School has celebrated its 90th birthday over three days during the first week of June.

Principal Ms Lynn Balfour said: “Commencing with an assembly on June 6, the celebrations continued with a nostalgic, memorabilia display until 6pm on Friday evening. “Ex-pupils from various decades came to reminisce and share favourite memories and stories, some meeting up with folks they hadn’t seen for many years. “It was also terrific to see a number of ex-staff members who had fond memories of their teaching careers at the celebration,” Ms Balfour said.

“We collected written memories from many who attended the display and we will add these, along with lots of other interesting information, to our fantastic, new time capsule made by Mr Paul Cassell. “The capsule will be proudly displayed in the library, ready to be opened on the school’s 100th anniversary. “The cake stall held on Wednesday afternoon, immediately after the birthday assembly, sold out in a matter of minutes. “It was a terrific, combined effort from those who sent cakes to be sold,” Ms Balfour said.