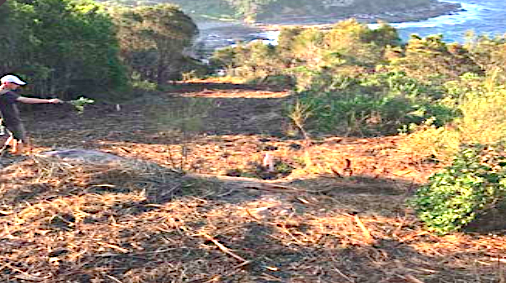 Bush has been cleared at Winney Bay for an extension to the 5 Lands Walk, stage 1.

[Forum] I am a Copacabana resident and a regular walker of bushland trails throughout the Central Coast, and, whilst walking at Winney Bay Reserve in January, was dismayed to find that a track had been bulldozed through the native bush adjacent to the cliff front from Captain Cook Lookout.

A COSS Fauna Survey, 2012, lists several threatened species that inhabit this reserve, which is one of the few places left on the Central Coast that, until now, have not come under the radar of developers. Last week, I noted that this road, which, incidentally, is close to Council warnings regarding unstable cliff facings, has now been asphalted.

I have not been able to locate a DA for this work, but note that a tender was put out by Council in January for the building of stairs to the new road. Council has already funded a stairway to the area, which was completed in 2015, which seems to be quite adequate for the annual 5 Lands Walk event.

Further enquiries indicate that this is a development initiative of the 5 Lands Walk, which appears to have morphed from a local community group into an organisation with a long list of ‘Platinum’ and Gold’ corporate sponsors, including Gosford Classic Car Museum, financial planners McGrath and Clark from Mona Vale, and the Peninsula Chamber of Commerce.

A synopsis has been prepared by Regional Development Australia Central Coast recommending a budget of $5,000,000 for the development of the Winney Bay Cliff Top Walk as part of the 5 Lands Coastal Walkway Masterplan, and includes designs for “market stall platforms which would be available for public hire for events such as food tastings, destination weddings and festivals”.

I am disappointed that 5 Lands Walk has become linked to a project of this scale and that the project has not been publicised more effectively to locals like myself, who are concerned with the impact that this will have on our area. As Copacabana is a small village, with poor roads and inadequate parking to cope with an influx of tourists, Council would be better employed focusing on funds for improving roads for ratepayers rather than developing infrastructure in Winney Bay Reserve.