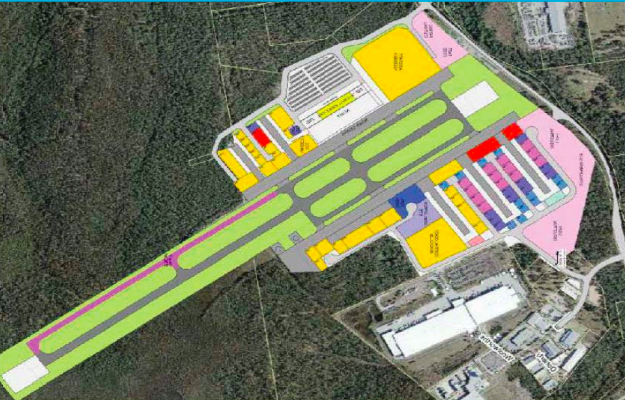 The Stage 7 blueprint in the latest masterplan for Warnervale Airport

Another rescission motion aiming to reverse the Central Coast Council’s current position on the future of the Warnervale Airport will be debated at a July Council meeting.

Leading the charge to keep the Airport as a hot-button issue for the Council is independent Central Coast Councillor, and former Wyong Council Mayor and Councillor, Greg Best. Clr Best said he could confirm the rescission motion, which has already failed twice, would be reintroduced on July 9 to reverse Council’s decision to stop all works on the expansion of the Airport at Warnervale. If Clr Best’s rescission motion were to be adopted, he would call for the latest Airport masterplan to be put on public exhibition and for the community to be consulted about whether or not they want an expanded general aviation hub at Warnervale.

All masterplan documents are already available on Council’s website. Subject to the survey results, Clr Best would then want Council to either exhibit the draft Airport masterplan or move for a total cessation of all uncontracted activities and obligations at the Airport. As a Wyong Councillor and Mayor, Clr Best was criticised by fellow Councillors for not being the champion of transparency and community consultation that he is today, In matters such as the abolition of the former Council’s precinct committees after the 2012 Local Government election and the making of decisions about the acquisition of new Mayoral Chains in confidential meetings, Clr Best was criticised by some of his fellow Councillors.

The new Central Coast Council is proactively releasing many documents that were kept confidential by the former Wyong Council and many of those related to more recent plans for the expansion of the Warnervale Airport into the Central Coast Regional Airport.

The Central Coast Council has, in fact, already conducted statistically-valid research about community interest in the Airport as part of its preparation of the first Central Coast Community Strategic Plan. According to Micromex Research, of all those asked to imagine what they would like the Central Coast to be in 10 years, only 1.2 per cent of respondents said they wanted an Airport.

When asked what residents loved about the Central Coast, “close to an Airport” garnered a low 1.2 per cent response rate. In response to the question ‘what would make their suburb better’, only 0.19 per cent of respondents chose building an Airport as a priority and only 1.86 per cent of respondents said an Airport would make the Central Coast better. Much higher preferences were for infrastructure that kept pace with the growing population, no overdevelopment and improved drainage, kerbs and guttering.

As part of the former Wyong Council, Clr Best’s position on the future of the Warnervale airstrip changed several times. In February 2003, Clr Best moved an amendment to a motion: “That Council proceed, as a matter of priority, with the necessary investigations to rezone and develop the surplus Airport land on the western side of the existing runway for industrial uses; that Council not proceed with plans to develop Warnervale Airport as a Central Coast Regional Airport; [and] that no capital funding be allocated to the Airport.”

As a result of that amendment, the then Wyong Council resolved to proceed, as a matter of priority, with the necessary investigations to rezone and develop the land for industrial purposes and not proceed with plans to develop Warnervale Airport. Clr Best said he had lobbied against the Airport in the 1990s because a major consortium wanted to expand it for use by jets. “What I lobbied for and ran one election on was we did not want further jet aircraft noise, it was the Airport noise I was on about particularly at Watanobbi,” Clr Best said. He said his 2003 decisions were based on a fi rm offer for the land from the Aldi supermarket company.

“At the time we had a formal request from the Aldi supermarket chain to seek to establish its major distribution centre at Warnervale in close proximity to Woolworth because there was a cluster beginning to develop there. “Aldi in principle indicated they would like to purchase the business park (the Airport land) and relocate themselves to the facility and we had an in-principle deal with them but they had to have clarity on whether Council would do this,” he said. “The Council mucked around with the whole thing, played politics with it and voted it down and Aldi went and built their facility at Hexham and it was around 600 jobs and a multi-multi-million dollar facility,” he said.

With the exception of the Aero Club, the Airport site and the 40 hectares of land between the existing Airport and the Warnervale business park, including the land earmarked for the Chappie Pie Chinese Theme Park, has remained undeveloped since 2003. By 2015 Clr Best, after supporting plans to build a Regional Airport at Kiar Ridge, swung back behind the development of a Regional Airport at Warnervale but most of the discussions were kept confidential, including a cost-benefit analysis which showed that the land was of more benefit to the community if sold or developed for industrial use. Clr Best said he did not support an expansion of the Airport into a jet aircraft passenger terminal or to any stage that would see it in breach of the Wyong Airport Restrictions Act (WAR Act). Wyong Regional Chronicle asked Clr Best why Central Coast Council staff had pursued and paid consultants to develop a seven-stage aviation hub development through to 2037 which included a longer (1799 metre) and a wider, strengthened runway, a south-western taxiway, expanded helicopter base, public car parking, extended western and eastern aprons, etc.

This work continued when the new Central Coast Council was under administration and despite years of documented public statements by staff that the constraints of the site meant a longer runway and expanded Airport was not logistically possible or safe at Warnervale. “You will have to ask the Administrator that,” Clr Best said. “The only plan that I would countenance would be the first five stages and that would not require any changes to the WAR Act, and no expansion, it would purely bring the aerodrome into a business park model that generates employment for our kids,” he said. “I wasn’t on the Council when they did this; the Administrator put the fence up, did the study, built the road. “I didn’t know all that work was being done until they did it.

“I don’t think there is one vote for the seven-step plan in the chamber but, where it came from, you’d better ask the Administrator. “But where are we now? “We are back in step with the community; we want the jobs, the maintenance, services storage to all occur in a business park aviation hub with no change to the Airport Restriction Act what so ever, so it is a win-win-win,” he said. “The people who don’t want to expand the Airport win, the people who want jobs win and the business community wins. “Every LGA has got a business park but very few have got the ability to have an Airport business park, it is fundamental supply and demand, we are in the box seat,” he said.