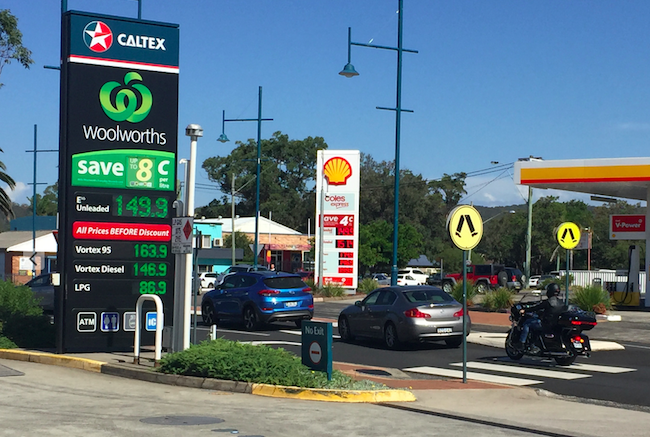 Archive 2018: Woolworths and Coles both charging $1.49 per litre for ULP in Umina Photo: David Abrahams

Member for Gosford Ms Liesl Tesch said she had been “thrown out” of State Parliament recently for her strong feelings about high petrol prices on the Peninsula.

“I was thrown out of the chamber recently for expressing concerns about the Government’s fuel prices app and that it could enable price fixing by fuel suppliers,” Ms Tesch said. “I was trying to make the point that there have been times when fuel prices on the Peninsula have been the fourth highest on the app throughout the whole state and I will keep encouraging residents to exercise their consumer rights and, when possible, buy their petrol off the Peninsula,” she said.

In addition to being ejected from Parliament, Ms Tesch said she had also recently “stormed” the office of the Minister responsible for Crown Lands, Mr Niall Blair. “I encouraged the Minister to take responsibility for the dredging because it is a safety issue but he referred me to the head of the RMS. “The RMS called me and said that based on my recent comments about safety maybe we should change the draft of vessels using the channel but that is not the solution, the solution is to just make the channel safe. “I have since written to RMS calling for them to put pressure on the Office of Crown Land who I believe is buck-passing,” she said.