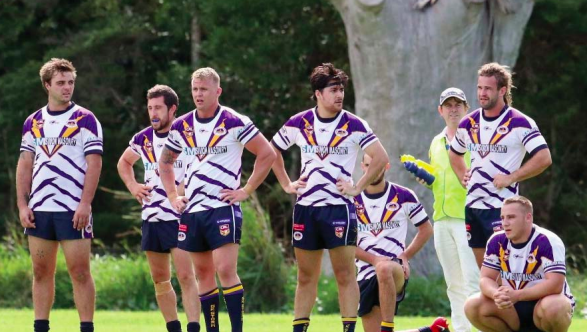 The Gosford Kariong Storm Open Grade team were sensationally stripped of a competition point and fined $500 by the Central Coast Division of Rugby League (CCDRL), following a technical breach arising from the round one draw played at Terrigal on April 8.

“In a decision variously described by local fans as, inflexible and heartless; the battling Storm, who has only tasted the single victory in this grade since 2011, was penalised, despite there being a number of extenuating factors,” said the Storm’s Publicity Officer, Mr Andrew Stark. The breach was in relation to the Player Points Index System (PPIS), which is in place to encourage clubs to develop and retain their own juniors while also maintaining a relatively level playing field of talent across the competition. Gosford were found guilty of inadvertently fielding a team adjudged to have been one point above the allowable 50 PPIS points.

According to Mr Stark, the eleventh-hour confusion that led directly to the PPIS breach can be sheeted home to the untenable situation that Gosford Kariong are placed in each and every season, in order to simply be allowed to play rugby league in the Central Coast Competition. “This, despite the fact that the Gosford Club has roots that extend back further than any other Club in the district, and that Gosford was the first town to form a football team when in 1892 a motley 15 trotted out to play on Clarke’s Paddock (known today as Kibble Park),” Mr Stark said. “Unlike the ‘Primary Clubs’ of the current day CCDRL, the battling Storm never knows whether or not it will be included in the draw until just weeks prior to the season’s kick off. “The Club is wholly reliant on one of the 10 first grade entities allowing them to play on their undercard. “This season, despite the players having trained enthusiastically since before Christmas, Gosford was only guaranteed a spot in the draw a month prior to kick off.

“This mad rush in the weeks leading up to the opening round in which player’s paperwork needs to be completed, submitted and evaluated, is at the core of the Round 1 breach,” Mr Stark said. “The situation becomes muddied however when the CCDRL’s three-pronged contributions to the Gosford mistake is factored into the equation. “The CCDRL remain unambiguously guilty of; previously having under-evaluated the Storm player at the centre of the breach, of being in direct breach of their own By-Laws with regard to the timing of the release of the PPIS Points list for the opening round, and of losing an email from the Gosford Kariong Club which had urgently sought clarification on the eve of the game,” Mr Stark said. CCDRL President, Mr Fred Hartup, countered the second of these strikes, stating that: “If clubs do not submit PPIS forms on time, it becomes impossible to send out gradings 7 days prior to the match.”

Mr Stark concedes that Gosford Kariong was late in tabling the remains of their paperwork, but said that equally complicit were the CCDRL, whose previous under grading of the player and their misplacing of a vital email, did ultimately play a sizable role in the Club’s one-point breach. Gosford Club President, Ms Renee Martin, in an impassioned plea to the game’s hierarchy said: “Given that we had done everything we could with the right intentions and that there were a couple of contributing factors on the CCDRL’s behalf, I do believe we should be given some form of leniency.” “None was forthcoming,” Mr Stark concluded.