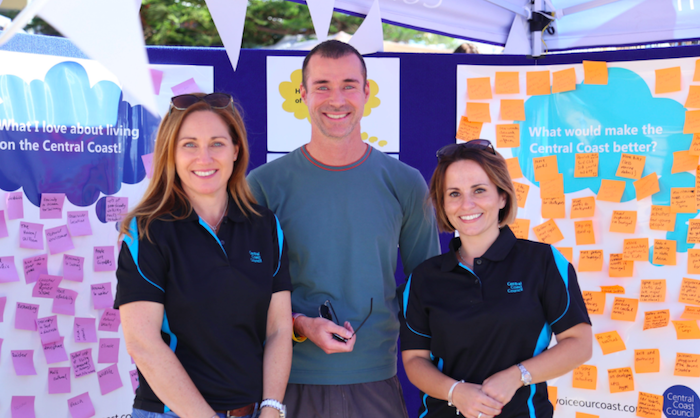 The draft of the first ever combined Community Strategic Plan for the Central Coast called One – Central Coast, has been released for a 28- day public consultation.

According to Mayor Jane Smith, the plan represents the culmination of 18 months of extensive consultation with the community, and establishes a road map for the future of the Central Coast over the next decade.

Mayor Smith said the process to develop the Coast’s first ever Community Strategic Plan had engaged many thousands of people in the local community and is a true representation of what the community thinks, feels, wants and values.

“The release of the first Community Strategic Plan for the Central Coast is significant in many ways,” Mayor Smith said. “It defines the environmental and social qualities that the community have told us they love about the Central Coast, and provides a clear path of action for what Council needs to prioritise and deliver to meet the needs of our growing population.

“As inhabitants of the sixth largest urban area in Australia, we have the opportunity to harness and direct our potential more than ever before.” The draft Plan comprises five key themes based on this vision that encapsulate the voice and values of the Central Coast community: Belonging; Smart; Green; Responsible; and Liveable.

The Plan also defines a community vision: “We are the Central Coast. A smart, green, and liveable region with a shared sense of belonging and responsibility.”

Connected Communities Director, Ms Julie Vaughan, said the plan aimed to enhance the day-to-day lives and opportunities of the Central Coast community through effective decision-making, planning, and service delivery across all government and non-government agencies.

”Council alone cannot deliver the outcomes and objectives of this first ever Community Strategic Plan for the Central Coast,” Ms Vaughan said.

“Shared decision making and effective working partnerships with government agencies, non-government organisations, business and, of course, our local community, will be critical to our collective success as a region.

“Together, we can create a vibrant and sustainable future for the Central Coast.” The draft Community Strategic Plan will be on public exhibition from Monday, April 30, until Monday, May 28.

When asked why such an important document was not debated at the April 23 Council meeting, Mayor Smith said: “Councillors have had a number of briefings about it and they are very comfortable about it going out on exhibition.

“Looking at the draft, I think it reflects well the community’s priorities, but it will be interesting to see community comments on the detail, and I am looking forward to the scope of the detail.

“It is a really important document and it really is exciting to have that fi rst plan for the whole Central Coast because it sets the vision for the next 10 years and all other documents have to be consistent with the plan,” she said.

Link to the Central Coast Council ‘Our Voice’ website