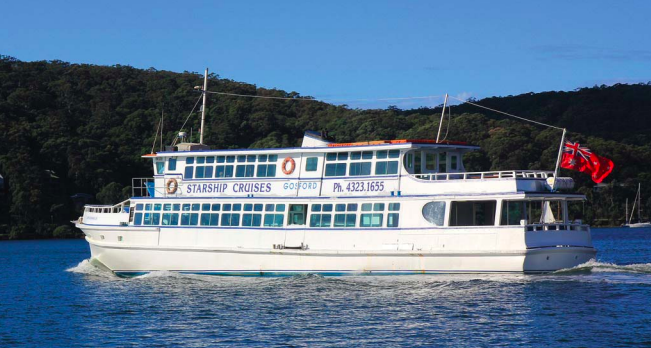 A Gosford cruise operator has cancelled a popular tour through the Ettalong Channel and has called on NSW Roads and Maritime Services to restrict passage to vessels with drafts of less than 1.5 metres.

Starship Cruises owner and master of the Lady Kendall II, Mr Alan Draper, said vessels with greater drafts should not navigate the channel at the entrance to Brisbane Water.

Mr Draper said he was no longer prepared to take the Lady Kendall II, which has a 2.2-metre draft, through the channel to do his sought-after Four Islands tourist cruise around Brisbane Water, Broken Bay, Pittwater and the Hawkesbury. “That cruise represents 50 percent of my income because it is one of the best boat trips in the country, but it is not safe to take her out,” he said. “It is a compounding sand situation down there and it is getting worse,” he said. According to Mr Draper, the channel is in the worst shape he has seen it in the 33 years he has been operating the Lady Kendall II.

He said ferry masters and anyone in control of a commercial vessel have grown increasingly nervous about driving through the channel “the RMS has provided”. “If it was a road, they would clear it. “If it was a train track, they would clear it. “If the RMS was serious about safety, they would put out a notice warning vessel with a draft of greater than 1.5 metres not to use the channel,” he said. Mr Draper said he believed he knew the answer to the two most important questions about the current state of the channel at Ettalong – what caused the problem and who is responsible for fixing it.

The channel to the entrance of Brisbane Water has been neglected for 150 years, he said. “For the last 150 years, no one has done anything. “We have always been the poor cousins of other waterways up and down the Coast.” In more recent times, the excavation for the building of the Mantra, beach nourishment and previous attempts to “sweep” the channel have all contributed to its current siltation, Mr Draper said. “Beach replenishment programs cause the channel to block because the sand from the beach winds up in the channel.” As for whose responsibility it is to fix the problem and pay to keep the channel navigable, Mr Draper said that was clearly a State Government job. “Council’s responsibility ends at the high tide mark. “It is a great business plan on behalf of the RMS to get Central Coast ratepayers to pay its bills. “Ratepayers should be really upset if the Council starts spending money on things that are the responsibility of the NSW Government,” he said.

“All we need is a channel dredge. “Where do they get this ocean-going super-dredge nonsense? “What are we? Dubai? “It costs $600 per hour to operate a modern dredge that could remove 900 cubic metres an hour. “If the RMS was to pay to run a dredge through the natural channel, not the one they’ve marked but the one that runs across from Ettalong Point to the south of Lobster Beach and then straight to Little Box Head, with the tides in and out, it would be clear in no time.” Meanwhile, Mr Draper said the RMS needed to get serious about safety and “stop people going through it”. If your vessel has a 1.5-metre draft you won’t get in on a low tide. “The only way for me to get out now is at the top of the high tide and then I can’t get back in. “I will have a go at anything but it is just too dangerous. “When you have white water coming in on a 1.2-metre sea it is like driving a car on ice,” he said.