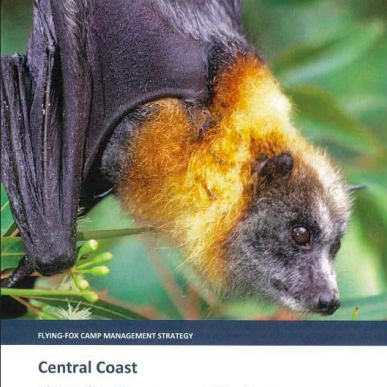 The Central Coast flying fox management strategy is on exhibition

A flying fox management strategy for the Central Coast will be the subject of a 28-day community consultation before it is finalised and adopted.

The strategy has been prepared to guide the management of the species on Council and other land and it will be administered by Central Coast Council and the NSW Department of Infrastructure – Lands and Forestry, until 2027. It will enable appropriate land management, as per NSW legislation, to reduce impacts of flying fox camps on local residents, while conserving flying foxes and their habitat, and enabling land managers and other stakeholders to use a range of suitable management responses to sustainably manage the flying fox population. It provides details of camp sites, species, community engagement and agreed management actions, designed to achieve objectives. Central Coast Council is aware of a total of eight Flying fox camps in the LGA, of which only four have had recent occupancy.

The strategy puts Council, private residents and the Department of Infrastructure in a position of being eligible for State and Commonwealth funding for implementation of the plan, including mitigation measures. A key component of the strategy is community education and engagement, and the strategy details Council’s proposed approach in this area. The strategy is backed up by the latest scientific research and current best practice so that Council is in a position of knowledge and strength in being able to respond to community pressure to take action at individual camps. The strategy clearly articulates management actions deemed acceptable and legal under current environmental legislation protecting the flying-fox species. For immediate action is the implementation of ‘FlyingFox Engage’ which is an engagement platform designed specifically to engage communities on the issues that arise from living with flying-fox species. Feedback from the community will be analysed and incorporated into the management actions taken at the four active camps and also in annual reviews of the strategy.

‘Flying-Fox-Engage’ will be used by Council’s Community Engagement staff to survey community attitudes towards flying-foxes and analyse and report on the data collected. The online survey and other engagement activities would occur after the public exhibition period for the strategy. The Central Coast is an important part of the home range of three flying fox species, also known as mega-bats or fruit bats. These animals are a critical component of the biodiversity of the region as they are pollinators of a range of native plants and disperse seeds over many kilometres. One of the four known active camps is located at North Avoca. The fl ying fox camp at Lake Shore Dve, North Avoca, is located on a Crown Reserve adjacent to Avoca Lagoon, which means it is under the care and control of the Department of Infrastructure Lands and Forestry.

During the camp occupation, flying foxes do sometimes extend onto both private and Council-managed lands, adding a level of complexity to the management of the camp. The camp at North Avoca, which covers approximately one hectare, is identifi ed on the National Flying Fox Monitor viewer as Avoca (No 520) and both Grey Headed Flying foxes and Black Flying foxes have been recorded as utilising the site. Flying foxes have been seasonally roosting at the North Avoca site for a minimum of 10 years, as a seasonal site and a maternity roost. Most activity is observed between February and May, which is mating season. Historically, the site is home to a few thousand fl ying foxes, but a record number were recorded in May, 2015, with over 30,000 animals counted in the census.

Foraging habitat within the camp has been identifi ed as Red Ash, Broad leafed Paperbark and Bangalow Palm. A total of 23 species of trees in the fl ower diet of Greyheaded fl ying foxes occur within feeding range of the camp. The strategy includes an assessment of 15 camp management strategies across three levels of intervention. It then identifi es the actions that are potential options for implementation at the camps requiring active management. The strategy will be reviewed every four years or if Council resolves to review earlier.

Change to fees for sports fields