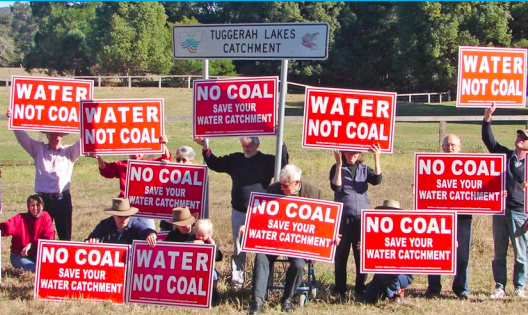 A summons has been issued against the NSW Minister for Planning, Mr Anthony Roberts, and Wyong Coal Pty Ltd, trading as Wyong Areas Joint Coal Venture, by the Australian Coal Alliance (ACA).

The community group has decided to take action in the NSW Land and Environment Court (LEC) to challenge the legal validity of the approval of the Wallarah II longwall coal mine, and Mr Roberts and Wyong Coal Pty Ltd are correspondents. “The fate of the proposed longwall coal mine beneath the Central Coast’s major water catchment supply will now be decided by the LEC,” an announcement from the ACA on Monday, April 16, said. “The ACA has persevered with this fight for so long because it is in the public interest,” the announcement said. “In 2011, Mr Tony Kelly, then NSW Labor Minister for Planning, rejected Wallarah 2 because his government found it was not in the public interest for the mine to proceed.”

“The O’Farrell Government took away the community’s rights to appeal major projects on merit, but judicial review rights are still available in the Land and Environment Court, and will be the basis of the ACA’s action to challenge the validity of the January approval of the mine by the NSW Planning Assessment Commission (PAC).” Senior Counsel representing the ACA, Mr Ian Coleman SC, said he was confident of the ACA’s prospects of success, and that the PAC had made a number of legal errors in their decision-making process. The ACA has been fighting to stop the proposed mine from going ahead for 23 years because it poses a threat to the Central Coast’s water supply. ACA Campaign Director, Mr Alan Hayes, said the water catchment was the lifeblood of the Central Coast. “It’s not just essential to protect our drinking water so that when people turn on a tap it’s there, it’s also important to have a guaranteed supply of potable water for industry to flourish,” Mr Hayes said.

“The community has been kicking the South Korean-owned mine project in the guts for more than two decades and we have no intention of stopping now,” he said. “Twice before, the South Koreans have held the plum in their hands, gloated over the prize, only to have it snatched from their grasp. “The community will not back down in its fight to protect the Central Coast’s most precious asset, its water supply. “It’s important that foreign interests understand that they don’t own the water, we do, and they have no right to jeopardise it just to satisfy their own destructive agenda. “Wallarah II is to NSW what the Adani Coal Mine is to Queensland, it really is the Erin Brockovich case of NSW,” Mr Hayes said, referring to the famous USA case of a Californian woman, with no formal legal education, who took on the Pacific Gas and Electric Company in 1993 and won. “The ACA taking this to the Land and Environment Court is like a David standing up to a Goliath,” he said. KORES Australia Pty Ltd, a fully-owned subsidiary of Korea Resource Corporation, is the majority shareholder of Wyong Coal Pty Ltd, the proponent who would hold the licence for the proposed mine.

Wyong Coal Pty Ltd has a paid up capital of $400. Mr Hayes said, that in consultation with the NSW Environmental Defender’s Offi ce, ACA’s Senior Counsel believed there were significant errors of law made by the PAC in their approval of the mine. “The PAC failed to consider an assessment of downstream emissions as per Clause 14(2) of the Mining State Environmental Planning Policy (SEPP),” Mr Hayes said, citing one example of the errors of law it would be asking the LEC to make a ruling on. “The PAC also failed to consider compensation for, and the impact of, the long-term loss of the water supply on private land owners, and it acted beyond its power to approve the project that requires third party consent.”

The PAC’s neglect to consider the need for flood mitigation is another error of law, according to the ACA’s case. “The main roads into the valleys (Dooralong and Yarramalong) will subside by 1.8 metres and that is a known fact, so what about the impact on all those people living beyond the valleys who will be flood bound.” “These are just some of the many considerations outlined in our Summons to the co-respondents,” Mr Hayes said. He said he believed it would also be the first case ever in the Land and Environment Court to be fought on the concept of inter-generational equity, the concept that resources and assets which don’t “belong” to a generation, need to be administered and preserved in trust for future generations.