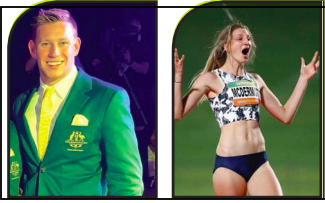 Young athletes from across the region are leaving their mark on Australian sporting history as the 2018 Commonwealth Games reaches its final legs.

Mingara Aquatic swimmer, Brad Woodward, performed strongly at the Australian Swimming Trials, finishing second in the 100m and 200m backstroke, to earn selection in Australia’s traditionally strong swim team, and he mirrored this performance in the pool at the Games, taking home silver medals in both the Men’s 100m and 200m backstroke events. Former Green Point Christian College student and Sydney University Athletics Club star, Nicola McDermott, will compete in the Women’s High Jump on April 14. McDermott is a standout in her field, having placed equal third at the 2018 Australian Athletic Championships, with a clearance of 1.80m, and this brilliant result was supported by a string of Games qualifying jumps. Born and bred on the Coast, McDermott started in Little Athletics at age 8 and fell in love with High Jump in her early years.

McDermott has mastered consistent progression in honing her craft while trying not to push too hard in her developing years, a philosophy practised by her long-time coach, Mr Matt Horsnell. McDermott’s approach is evidenced by podium finishes at three consecutive Australian Junior Championships, where she made jumps of 1.70m, 1.79m and 1.88m respectively. McDermott’s personal best is 1.90m from 2017.

Representing internationally a number of times, McDermott excelled at the 2017 Universiade, making the final and jumping 1.88m. McDermott blitzed the field at the 2017 Australian Uni Games on the Gold Coast, setting a new games high-jump record of 1.85m, a monstrous 25 centimetres higher than the runner-up. Inaugural Central Coast Academy of Sports Male Athlete of the Year, Jesse Parahi and the Australian Men’s Rugby Sevens team will be looking to repeat their success achieved in Sydney earlier this year, where the Australian Men’s and Women’s teams claimed a historic double victory at home. All eyes will be on Parahi, who was named team captain after the shock exit from the Games of former captain, James Stannard, who’s jaw was broken following a coward punch attack in late March. Parahi, who made his international debut at the London Sevens in 2010, will run out for his 40th cap on the Gold Coast, when Australia aims to better the bronze medal they earned in Glasgow four-years-ago. “Super excited and honoured to be able to lead these boys out at the Games,” Parahi wrote on his Facebook page. “Thanks to everyone for the messages of support. “The team and I really appreciate it. “I will do my best to get back to everyone when the job’s done,” he added. Parahi and the rest of the Australian Men’s team will hit the field from April 14. Former Kincumber High School student and Olympic Gold Medallist, Ellia Green, is a member of the groundbreaking women’s Sevens team, as females compete in Rugby Sevens for the first time ever at the Commonwealth Games, and will take to the field April 13. Hockey star and 2008/09 CCAS Male Athlete of the Year, Matt Dawson, is hopeful of a quick recovery after suffering a significant eye injury at training recently. The star defender will be wearing special safety glasses during matches as he and his teammates farewell captain and Australian flagbearer, Mark Knowles. The Kookaburras are the number one ranked team in the world and go into the tournament as strong favourites, aiming to win their sixth consecutive Commonwealth Games title. Dawson and the Kookaburras have thus far blitzed the Men’s competition, having spanked South Africa, Scotland and Canada, in a dominating performance in their first three matches. The Kookaburra’s face off with New Zealand on April 11, with results unknown prior to publication. Rounding out the region’s commonwealth talent is track cyclist, Nicholas Yallouris, who finished 10th in the 1000m Individual Time Trial held on April 8.