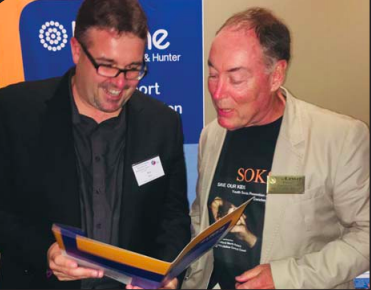 Mr Rob Sams and Mr Lester Pearson at the dinner

North Gosford Rotary Club held a Benefactors and Beneficiaries Dinner on February 26 to thank Central Coast people, schools and businesses for getting behind its Save Our Kids (SOKS) suicide prevention project, other youth support projects, and to pledge further funds.

Another $76,000 was donated to Lifeline Central Coast, $10,000 to Top Blokes, and $4,000 donated to Stand Tall. Around 240 people attended the dinner at Mingara, Tumbi Umbi, including The Hon, Tanya Davies MP, NSW Minister for Mental Health. The Club’s SOKS team chair, Mr Lester Pearson, told those gathered about the work done under SOKS and introduced some of the young people who have benefited from the program. SOKS funds Lifeline Central Coast to provide safeTALKs, a three-hour course training school staff, teachers, welfare people and counsellors about how to identify and approach someone who was contemplating suicide. Last year the program was expanded to provide a safeTALK program for Year 11 students.

Mr Pearson said that since 2012, more than 2,000 people have been trained, and Lifeline estimates almost 500 local lives have been saved. Top Blokes Foundation teaches life skills to Year 9 and 10 students. Stand Tall provides young people with support and relief in dealing with lifestyle behavioural addictions, such as drug, alcohol and eating disorder dependency, all types of bullying and other forms of violence.

“Without the benefactors who contribute vital financial support of the SOKS Project, we would not have been able to achieve these great and lasting results for our community,” Mr Pearson said. Lifeline Central Coast regional manager, Mr Rob Sams, congratulated the Club on its commitment to serving local young people and saving precious local lives. “The men and women of this wonderful local Rotary Club, and their supporters are helping Lifeline and other organisations to save lives,” Mr Sams said. “Importantly we are building resilience and capacity in the community to save more lives in the years to come,” he said.

“Self-harming behaviour has increased over the last few years, especially in those aged 10-17, particularly among girls. “Self-harming behaviour is not necessarily of suicidal intent, but the means chosen and the frequent tendency of these behaviours, can place a person at risk. “Early intervention is always the goal and awareness training around self-harm is in our training mix,” Mr Sams said. Almost 3,000 Australians die by suicide each year, around double the road toll. Suicide is the leading cause of death for all Australians aged between 15 and 44.