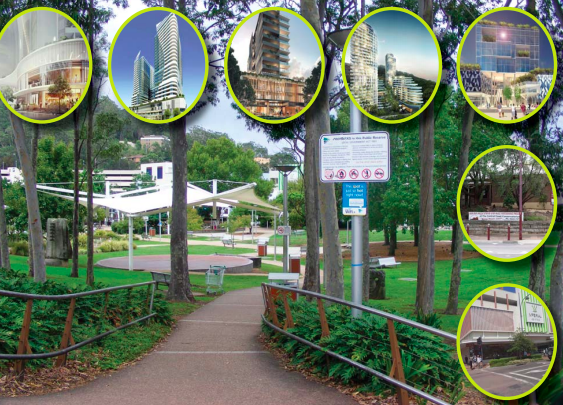 The area around Gosford’s Kibble Park has been identified by the NSW Government Architect as, potentially, the city’s renewed civic heart, as part of its work on the Gosford Urban Design Implementation Framework (UDIF), due to be completed in May.

A refurbished Imperial Centre, John Singleton’s Bonython Tower in Mann St and plans to build the new regional library in Donnison St, are currently the strongest signs of life in this part of the CBD. Deputy Government Architect, Mr Ben Hewitt, said it was an area that had been overlooked in recent years because government investment had focused on the waterfront and the hospital precinct. President of the GosfordErina and Coastal Chamber of Commerce and Industry, Mr Rod Dever, said a lot of work had already been put in, over many years, to make Kibble Park a more accessible, activated area with more events. “The Chamber and GBid (Gosford Business Improvement District) realised that the park’s activation would bring back life to the city and that adds something to the commercial district,” Mr Dever said.

“So when you talk about a civic heart, then Kibble Park is the obvious meeting place, a place to come together, to celebrate, so the Chamber supports bringing the park’s surroundings into a current and more modern environment,” he said. Mr Dever said it was obviously investors like Mr Paul Lederer of the Lederer Group, which owns the Imperial Centre and the Kibbleplex site, and Mr John Singleton, who is building Bonython Tower in Mann St, who were the early adaptors taking the city forward.

“I drove along Mann St this morning and there were people just stopping and looking up,” Mr Dever said of the removal of the scaffolding from the Mann St frontage of the first six storeys of Bonython Tower. “This is going to be a grand building and to actually see the shape of the building rising up out of the ground, the size and scale they are actually delivering, was quite a sight,” he said. “People say little old Gosford, but little old Gosford is the capital of the Central Coast, and it is about to take pride of place. “Bonython has certainly generated a lot of interest and so much business confidence, as well as confidence for other developers. “It just took one person to have the gumption and the money to make the first move,” Mr Dever said.

“I met with Council yesterday [March 13], we spoke about their ability to deliver two shovel-ready projects at the same time, and Council is very confident of their ability to do that. “I walked away from that meeting with the Mayor and General Manager very confident that their planning was sound and they had the commitment to make this happen. “They are willing to listen to the community and Lee Shearer’s team, so we won’t end up with a disjointed two-speed system,” he said.

The progress is positive, but significant swathes of the city’s ‘civic heart’ currently remain depressed and dilapidated. The depressed areas include two massive development sites, Waterside Towers, on the corner of Georgiana Tce and Baker St, and Mariner Towers, on the corner of Donnison and Mann St. They were approved by the Joint Regional Planning Panel (JRPP) with a combined value of almost $400m, which have not progressed very far beyond the development approvals given in 2015. Mayor Jane Smith has this week thrown the ball back into the court of the city’s developers and landowners to do their part in return for the incentives provided by the former Gosford Council, and the substantial investment that’s already been made by all three levels of government in an attempt to revitalise the city.

So, in preparation for the Government Architect’s unveiling of the UDIF in May, Coast Community News looks at what’s beating strongest in the so-called civic heart of Gosford, what’s barely breathing and what’s dead as a dodo. Today’s edition has examined the CBD area between Georgiana Terrace and Erina St, bounded by Henry Parry Dve and Baker St. In future editions we will examine the waterfront, the area between the waterfront and the civic heart and the hospital and schools’ precincts.