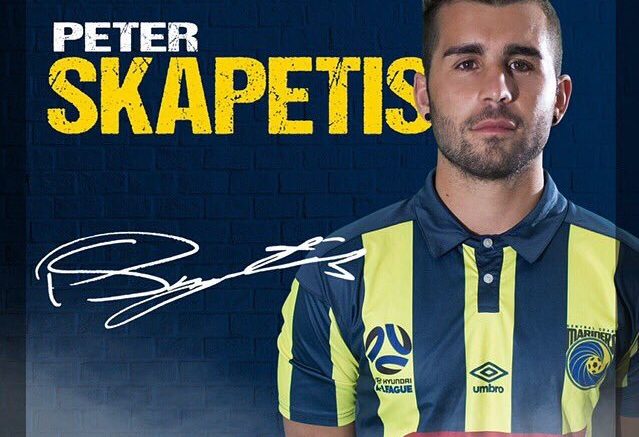 The Central Coast Mariners have signed 23-year-old attacker, Peter Skapetis, from Brisbane Roar, until at least the end of the Hyundai A-League 2017/18 season.
Skapetis signed with Brisbane Roar in August 2017.
The former Youth International returned to Australia after plying his trade in England for six years, and he made 14 Hyundai A-League appearances for the Roar this season.
Skapetis made an immediate impact at Brisbane, finding the back of the net in his competitive debut, that saw the Roar overcome Peninsula Power 4-2 in the FFA Cup.
Skapetis’ impressive form continued when he scored from distance against Melbourne Victory, also in the FFA Cup.
Melbourne-born, Skapetis ventured to England as a 16-year-old and ultimately signed with English Premier League Club, Stoke City, after a stint in West London with Queens Park Rangers.
Skapetis has represented Australia at under 20 and under 23s level where he scored 11 goals in eight appearances.
“I’m really excited to start training with my new team and hit the ground running,” Skapetis said.
“Everything happened very quickly and I’m really happy to be here and looking forward to meeting all the boys.
“The type of football Paul Okon has the Mariners playing was a big factor for me.
“I’ve always respected him.
“I know a few of the players personally, who are all great guys and great players, so it just seemed like the perfect fit, so when the opportunity presented itself, I wanted to take it.
“I want to put the ball in the back of the net, play finals football and offer everything I can to get the team higher up the ladder.
“I’m really grateful for this opportunity, I’m ready to go if called upon,” Skapetis said.
Mariners Head Coach Paul Okon welcomed Skapetis to the Mariners.
Peter is fit and ready to go,” Okon said.
“He will add to our depth in the front third as he can play anywhere in attack.
“With plenty of football still to be played, we’re confident that Peter can contribute to helping us win football games,” Okon said.