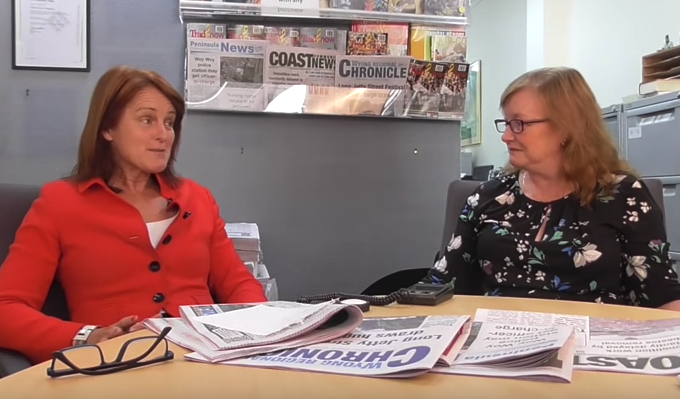 Member for Gosford Ms Liesl Tesch has called for cost-sharing between Central Coast Council and the State Government to keep the Ettalong Channel open.
She said the safety of the Ettalong channel was one of her highest priorities.
“The loudest voice of the community at this point of time is about the dredging,” Ms Tesch said.
“The impact that is having on the community, on the fishers, on the shops around Ettalong, and the people who are then commuting, the kids who are picked up off the ferry who travel to school on the northern beaches, the tourists, and the people who are using the ferry to commute to work,” she said.
“The tourist dollar is being lost and now I am having the voices from Hardys Bay coming to me about this.
“The yacht club is a huge voice on the income they are losing from people going out to compete with other yacht clubs and yacht clubs coming in to race and also the people who just visit the Gosford sailing club to have lunch.
“So that is the impact of that dredging, the tendrils of that go across our community and the economic cost is significant.
“My fear is the ferry is not going to be able to operate in summer.

“It is already not operating in rough seas or low tides and the economic impact on our community of that tourist dollar is so important.”
Ms Tesch said there was finally long-term funding on offer from the NSW Government that had been a “long time coming” and she hoped Central Coast Council would agree to an ongoing 50:50 funding arrangement.
However, she said the emergency dredging off Little Box Head had not worked.
After the first lot of dredging, the ferry hit bottom two days after its completion, she said.
“The keel of our daggy old boat hit the bottom three days after the last lot of emergency dredging” the former Paralympian sailor said.
Ms Tesch said she had gathered and tabled in the NSW parliament, 500 signatures in support of a long-term solution to keep the channel viable.
She said, if the Central Coast Council and the NSW Government were not prepared to enter an ongoing 50:50 funding arrangement, the Council needed to consider acquiring its own dredge.
Ms Tesch listed the channel as her first priority in the latest Central Coast Newspapers video news (with closed captions).

Cause of granny flat fire under investigation