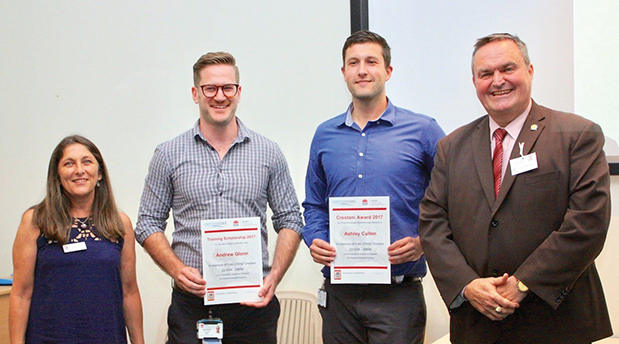 Six young health professionals received awards at the Scholarships in Radiotherapy Annual Presentation Awards Ceremony, held at the Central Coast Cancer Centre, Gosford Hospital, on November 17.
Director of Medical Physics, Dr Chris Lee, welcomed the guests and showcased the work carried out by the award recipients.
Mr Ashley Cullen and Mr Andrew Glenn, recipients of the International Scholarships Award, travelled to Sweden, Italy and Germany, to study surface guided radiotherapy (SGRT).
SGRT has emerged as one of the next key improvements in radiotherapy treatment.
This technology offers different benefits to different patient groups.
“Ashley and Andrew will be critical in the decision making and safe implementation of SGRT at the Central Coast Cancer Centre,” said Scholarships in Radiotherapy Secretary, Ms Noelene Ryden.
They were presented with their Awards by Central Coast Deputy Mayor, Clr Chris Holstein, and, Ms Belinda Crestani, of Scholarships in Radiotherapy.
Other awards went to Radiotherapy graduates, Ms Sarah Docherty and Mr Ben Alcevski, who, for the past 12 months, have been researching methods of cancer treatments at the hospital facility.
Two recipients, Ms Katie Sadler and Mr Jack Bowman, were recipients in the inaugural Crestani Partnership with the University of Newcastle Award.
Hosted by the Central Coast Cancer Centre, they will research aspects of cancer therapy over the next two to three months, under the supervision of Dr Yolanda Surjan, Deputy Chair of Research at the Faculty of Health and Medicine and Senior Lecturer at the University of Newcastle.
Around 50 guests, including dignitaries, hospital executive, principals of community groups, and scholarship in radiotherapy supporters attended the presentation evening, and several organisations received acknowledgement for their sponsorship of the different Awards.