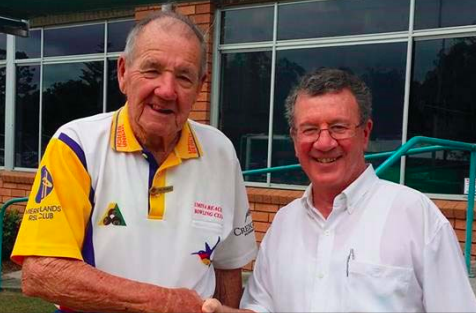 Patron, life member and past president of Umina Beach Men’s Bowling Club, Mr Wal Rainbow has been honoured with life membership of Bowls Central Coast Zone 15 for his services to the zone and to bowls in general.

His award was presented by the Deputy President of Zone15, Mr Tony Hegyi, and included a zone life membership jacket, shirt and certifi ate together with his life membership badge. Mr Rainbow’s contribution to the zone consisted of zone president from 1991-1994; vice president 2001-2002; state councillor 1995- 1997; and zone patron 1997-2009. He was awarded the Australian Sports Medal in 2000 for his contribution to lawn bowls.

The presentation was held on Saturday, November 18, at Club Umina on the Umina Beach Men’s Bowling Club Annual Presentation Day. Almost 90 bowlers and friends attended the day where lunch was followed by a game of bowls. Mr Lee Patterson won the Major Singles and was named Bowler of the Year. Encouragement Award went to Mr Shaw (Sid) Stokie. Achievement Awards went to Mr Roger Twells and Mr Shane Starkey, both of whom had excellent results in the zone competitions. Past president Mr Ian Jarratt was also honoured, receiving life membership to the Men’s Bowling Club for his contribution to Club Umina, the Men’s Bowling Club, and annual Prostate Charity Day.