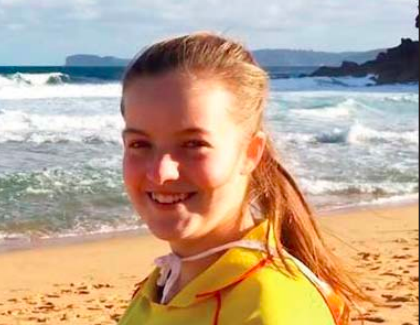 Killcare Surf Club lifesaver Jennifer Webb is to be given a Meritorious Award at the Surf Life Saving Australia Awards of Excellence on November 4, at a function at the Art Gallery of NSW.

“Killcare has fewer rescues but when we do, they’re serious,” according to club publicity officer Mr Craig Sheppard. “Easter Monday was a day 16-year-old Webb displayed bravery and acted without hesitation. “She demonstrated a degree of athleticism and decisiveness that truly saved a life. “For the preceding six hours of the patrol, conditions had required consistent vigilance of the flagged area. “Swell height was moderate; however intermittent sets would come in causing fl ash rips outside the flagged area. “‘Swimming not advised’ signs had been posted to ensure parents remained vigilant of their children.

“Seventeen preventative actions were made during the day,” he said. “A group of boisterous friendly lads, aged 18-22, had been playing soccer north of the flagged area. “Just before 3pm, a 22-year-old male, who later advised he had no swimming ability, dashed into the water to retrieve their soccer ball. “He had unwittingly entered a fl ash rip. “Another from the group with some swimming ability had gone in after him and soon became our second rescuee.

“Our primary swimmer, Jennifer Webb, on her fourth straight day of patrol on two beaches over Easter, used the rip to her advantage and was past the break in a manner that a member of the public later described as lightning speed. “The victim had been howling with terror between waves and had used the last of his energy, in fact he later said he had given up, when another set arrived sending him under. “Webb retrieved the man from under water by his hair and with the assistance of a nearby surfer, secured the tube around the conscious yet rag-doll like patient. “More waves arrived. The patient endured.” The victim was now around 80m from shore. “Thanks to assistance from an off-duty lifesaver, Webb was able to expedite the rescue by grabbing his board and riding the fi rst set in with the patient, returning him rapidly to shore where oxygen therapy was rendered promptly.

“It is certain that without Webb’s actions, the patient would have drowned,” Mr Sheppard said. “Having started at Killcare as an Under 6 Nipper, Webb is a highlyvalued member of the Killcare club and actively contributes to other clubs on the Coast as well as competing in Infl atable Rescue Boat racing. “She is a true exemplar of the Surf Life Saving movement,” Mr Sheppard concluded.