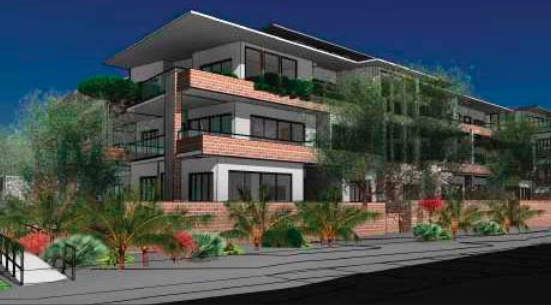 Submissions from community members regarding the proposal to demolish the Woy Woy Sporties Bowling Club, on the Corner of Brickwharf Rd and North Burge Road, and replace it with 63 senior living apartments, retail and a club, totalled 30 by November 23.
Save Woy Woy Waterfront spokesman Mr Ross Cochrane said he expected the number of submissions to exceed 50 before the deadline of December 11, which would enable the application to be considered by a Council meeting.
The applicant lodged an access report with Council on November 10 and submitted further plans on November 13.
The major issues raised by residents in the 30 submissions received so far included objections to the scale of the proposed development and flooding and storm water management issues.
One submission said: “At the junction of Brick Wharf Rd and North Burge Rd, which is the address of this new development the road floods.
“If we have big tides, the road floods.
“If we have heavy rain, the road floods.
“If we have a high tide and heavy rain, especially in an East Coast Low, this area is completely covered and the roads are impassable.
“How will any underground car parking be able to cope with that?”
He said none of the individuals who had undertaken to write a submission to Council following the public meeting held to discuss the Sporties proposal had done so as yet.
“The 30 submissions already received by Council were from other concerned people,” he said.
Mr Cochrane said he had twice emailed all 15 Central Coast Councillors but only two had responded.
They were Cr Chris Holstein and Cr Rebecca Gale Collins.
“I find it very disappointing the others have not responded.
“I figured just from courtesy they would all reply at least with a standard email.”
Cr Holstein and Cr Gale Collins both undertook to consider the concerns of the community if the proposed Sporties redevelopment plans came their way.
Mr Cochrane said the latest plans and access report submitted by the developer were “just a rehash, no real changes from the original stuff”.
Mr Cochrane said he believed the proposal as it stood had many deficiencies.
“There is not even a mention in any set of plans about the water issue we have,” he said.
“We have tidal inundation.
“We would be the lowest point on the Peninsula.
“We get flooding on that area six times a month, every high tide you will see water coming up from the gutter.
“Somehow they have stated they have got an exemption for onsite storm water retention.
“It is my understanding that a new development can’t release any more water than the building that was already there.
“They are relying on seepage but the new plans show a huge roof area and an underground carpark so there can be no seepage.
“All the water will go out through the gutter so they are supposed to build a huge retention pit and they haven’t got one.
“Council’s consent for the much smaller 2014 application to build boatshed restaurants on the water side of the site said they would need onsite retention but in the new stormwater plan they are saying they are onsite retention exempt.”
Mr Cochrane said he and several other concerned residents had requested information from Central Coast Council that has not been released on the basis that it is “commercial in confidence”.
In particular, Council has not released minutes from a pre-DA meeting held between Woy Woy Holdings Pty Ltd representatives and Council staff.
Community members have also been denied information about the change of ownership of a triangle of land that was marked as community reserve in the 2014 plans but incorporated into the development site in the 2017 plans.