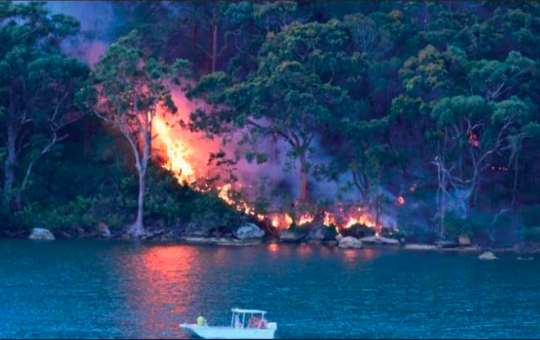 The Bays Community experienced an early start to the bush fire season when a blaze, believed to be deliberately lit, destroyed 10 hectares of Brisbane Water National Park.
NSW Rural Fire Service reported that firefighters from its Central Coast District were on scene to fight the fire which ignited on November 13 at around 5pm.
The bushfire was burning on Spion Kop in the Woy Woy Bay area.
The fire did not threaten properties and was burning in a remote area of Brisbane Water National Park that was only accessible by fire boats.
Rural Fire Services operations officer Mr Frank Overton said the police and fire services investigation unit were still investigating the incident on November 23.
“The extent of the blaze was approximately 10 hectares,” Mr Overton said.
“It started 30 metres above the water line at Woy Woy Bay just near Spion Kop but it was nowhere near any walking track.
“It was probably half a kilometre or more away from any track,” he said.
“The National Parks and Wildlife Services were in charge of the incident because it was in the National Park and Fire Services firefighters went in by boat and then they had to control the fire using hand tools,” he said.
According to Mr Overton, teams of 15 personnel were involved in fighting the fire on each of the two days it took to extinguish.
“It was in a very difficult area, an extremely steep and rocky area, but we had no property anywhere near it and fortunately had north east winds and the conditions were quite mild.
“These sort of fires can pop up at any time through either accident or deliberate or natural causes and if they are not prepared they need to be,” he said.
Bays Community Group president Ms Cathy Gleeson said two water bombing helicopters were in action over a two-day period along with National Parks and Wildlife and local firefighters who were ferried over in barges to battle the fire.
“This senseless act was witnessed by some of our vigilant residents who took photographic evidence at the time and reported it immediately to police,” Ms Gleeson said.
“This is a great example of neighbourhood watch in action and of how we should look out for each other and for our community,” she said.
“I encourage everyone to always be alert and report any suspicious activities within our Bays so that we can possibly avoid this type of destruction from happening again.”

Helicopter at Warnervale for bushfire season