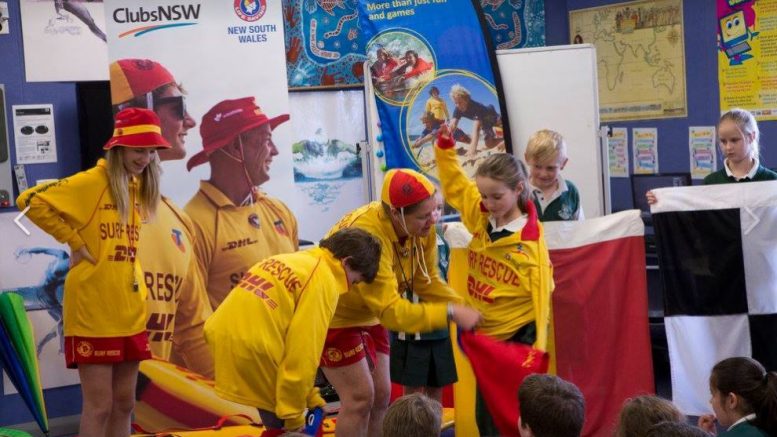 An Ocean Beach Surf Lifesaver is publishing a children’s book to raise awareness and funding for beach safety through Surf Life Saving Australia.
Woy Woy resident Ms Louise Lambeth said her book, Annie and the Waves, was inspired by her work with Surf Life Saving NSW’s Beach to Bush Program, which sends life savers to rural areas to educate families, communities and children about beach safety.
“At least 50 per cent of people rescued by surf lifesavers live more than 50km away from the coast and sadly more than 50 per cent of people who drown live more than 50km from the coast,” Ms Lambeth said.
“Beach to Bush aims to educate young people and their families in rural areas about safety at the beach and other aquatic environments.
“The program is a one hour interactive surf safety presentation delivered to school children by experienced and enthusiastic surf lifesavers.
“My family and I have completed four tours with the SLSNSW Beach to Bush Program from 2012-2015.
“We have toured many areas including Parkes, Forbes, Armidale, Inverell and Merriwa.
“The smallest school had four pupils and the largest around 700,” she said.
Ms Lambeth’s book follows the plucky Annie as she and her family go on a seaside holiday for a week.
During the visit Annie discovers just how unpredictable the ocean can be.
Annie is initially wary of the waves, but after meeting the lifesavers, and with the help of her dad, she soon discovers the joys of swimming in the sea.
Annie’s confidence grows until she experiences a surging wave, a wave that drags her into deep water.
Annie must remember everything she has learned about the sea and surf lifesaving to get help.
Creating a surf education resource from a child’s perspective was something Ms Lambeth has wanted to do for a long time.
“While there is child focused surf education resources there are no children’s story books from the perspective of a child,” Ms Lambeth said.
“This book is aimed at four to eight year olds and has a guide for parents while reading the book.
“The book content has been assessed by librarians and primary school teachers with an interest in children’s literature for readability and age appropriateness and as children read Annie and the Waves they will learn important beach safety tips like, lifesavers wear red and yellow, always swim between the flags, about different kinds of waves and beaches and how they can affect your safety and to remain calm if you do get into trouble in the water.”
Despite some of these seeming like common knowledge to locals, Ms Lambeth said children who have not grown up with beach access often have little to no beach safety knowledge.
Annie and the Waves has been a story five years in the making for Ms Lambeth, who has the backing of Surf Life Saving Australia, Surf Life Saving NSW and her own Ocean Beach Club.