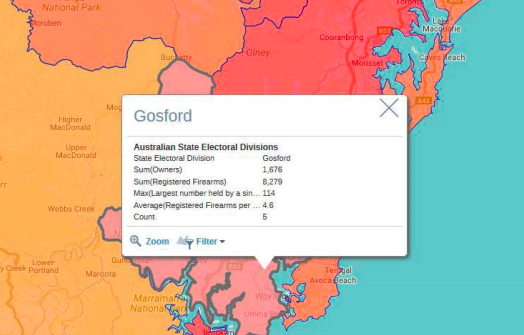 Firearms statistics for the NSW state electorate of Gosford

There are currently over 6,000 firearms registered in the 2250 postcode, according to data obtained from the NSW Police by the NSW Greens.

On average, that means that one in every 10 people living in the area, which takes in rural zones like Bucketty and Central Mangrove, but also urbanised centres like Erina and Gosford, owns a gun. However, The Greens spokesperson for the Central Coast, Mr Wolfgang Koerner, said one gun per 10 people, man woman and child, doesn’t tell the whole story. Gun statistics for the NSW state electorate of Gosford

Wolfgang Koerner, speaking on behalf of The Greens Central Coast, said the first reason for producing the app was to raise public awareness of the number of registered guns already held in each area. By doing so, The Greens hope to prompt community members to reconsider the stance being taken at a Federal level by Liberal Democrats’, Senator David Leyonhjelm, and by the Shooters and Fishers party at state level, to water down existing gun laws. “In view of current levels of gun ownership, should we be doing that,” Mr Koerner said. “Should we be going down the same track as the United States, where individual civil liberties become more important than community safety?” he said.

According to The Greens MP and gun control spokesperson, Mr David Shoebridge, the whole Central Coast has almost 23,000 guns, less than the Hunter, South Coast and the North Coast, but on a par with the Riverina and more than the Illawarra. “One gun owner in Gosford has 114 guns, another in The Entrance has 115 guns, another in Avoca Beach has 87,” Mr Shoebridge said. “These gun owners are not collectors or arms dealers, but private individuals who have been allowed to amass private arsenals,” he said. “This is because a loophole in NSW’s gun laws allows private individuals to use the same reason to buy their fi rst, 10th or 310th gun. “We need to close this loophole immediately, there is no good reason for a private individual to own hundreds of guns. “The total number of guns in NSW has jumped by 65,000 in just two years.

“There are now over 900,000 registered guns across the State. “Fewer households own guns, but ownership has become more concentrated. “It is inevitable that some of these private arsenals will end up in the hands of criminals. “Just last week, 15 guns were stolen from a property in the Hunter Valley. “If this trend is allowed to continue, NSW will have over one million registered guns within another two years. “A 20-year review of gun laws enacted after the Port Arthur Massacre in 1996 did not even look at capping the number of guns that can be owned by one individual. “Instead, it focused mainly on reducing red tape for the gun lobby. “Labor and the Liberals must stand up to the gun lobby and stop ignoring the community, who overwhelmingly support serious gun control,” Mr Shoebridge said.

Projects valued at $65M have been cancelled, deferred or reduced

Aspires project proves to be inspirational