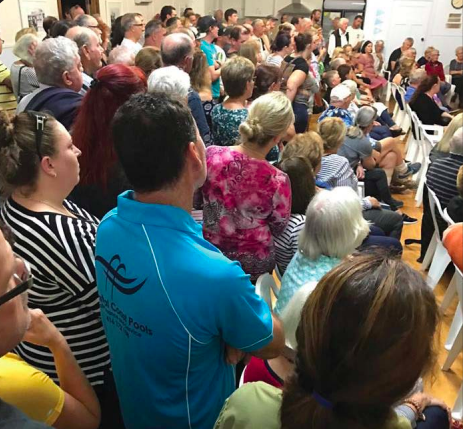 Archive 2017. Standing room only during the community meeting at Davistown Hall to discuss the future of the wetlands

Hundreds of concerned residents packed out the Davistown Progress Hall on October 11, when a public meeting was held to discuss the sale of Tidal Shoals.

Tidal Shoals is19.2 hectares of Davistown-Saratoga wetlands, with an estimated development value of $124 million, slated for auction on October 24 in Sydney. During the meeting, the community discussed the environmental implications, the potential population and infrastructure impacts of the sale and development of the wetlands, and the community’s vision for the future of the land. Meeting convenor, Ms JoAnne Lloyd, said the purpose of the meeting was to bring the sale of Tidal Shoals to the community’s attention, and to enshrine the current zoning of the wetlands so that they might never come under the risk of development.

“I want to make it clear that we have no objection whatsoever to the land owner selling his land,” Ms Lloyd said. “What the community is concerned about, and the point of the meeting, are one and the same, the preservation of the wetlands,” she continued. As Ms Lloyd noted, the matter is complicated by the land’s ambiguous zoning. Currently the wetlands are listed under a Deferred Matter zoning by Central Coast Council.

A Deferred Matter zoning is normally applied to sites earmarked for Council’s Coastal Open Space System, but also stipulates that rules applied to the land under the Local Environmental Plan (LEP) still apply until a new environmental zone is established. This zoning should mean the wetlands retain their former 7a zoning of Environmental Conservation Land, which protects them from major development, residential or commercial, but some real estate agents believe that the land could be zoned as R2 Low Density Residential. It is understood that some of the land is already zoned for residential development. Ms Lloyd said the community was “very concerned” about the way Tidal Shoals had been advertised and marketed, and said that there was little to no community consultation regarding the sale, which prompted the meeting.

“We know that the wetlands contain the endangered Golden Green Bell Frogs as well as a population of Bush Stone Curlews, and a number of other fl ora, fauna and ecosystems that these important saltmarshes support,” Ms Lloyd said. “Environmentally, if this was not reason enough for the land to remain protected under 7a zoning, there is also the matter of flooding and water fl ow and management in Davistown and the Brisbane Water that would need to be studied if the land was filled in and developed,” Ms Lloyd said. During the meeting, members of the community also raised concerns regarding the impact that potential development would have on Davistown’s infrastructure.

“There is one access road in and out of Davistown, the area is known to flood on occasion and our basic infrastructure just couldn’t cope with a development to the scale of the land on offer,” Ms Lloyd said. Central Coast Mayor, Clr Jane Smith, and the land owner, Mr Tony Altavilla, both attended the meeting. “Clr Smith told us that while she personally supported the idea of the land being preserved, we can’t rely on Council to just wave a wand and purchase the land. “Mr Altavilla also spoke at the meeting, but we could not get him to postpone the auction. “Ideally, we would love to see the auction postponed so that the community, Council and Mr Altavilla could work together to come to an agreement that everyone is happy with, but Mr Altavilla made it clear that this would not be happening,” Ms Lloyd said.

Following the meeting, a new committee was formed to liaise with all three levels of government and the community. The new committee has since started a petition to preserve the 7a zoning which has already received more than 700 signatures. “We will present this petition to our local politicians and to Council. “Our goal now is engaging with all three levels of government to secure the funds needed to keep the land in public hands and away from overseas developers. “Again, I want to stress that the community have no objection to the land being sold. “What we’re trying to do is to ensure that these lands remain environmentally protected and sensitive, regardless of whether they’re sold or not sold. “We would love to see Council or the state buy the land and put it back in public hands.

“Gosford Council understood the environmental significance of these wetlands and we hope that local, state or federal government will come through and see these lands rezoned and protected,” Ms Lloyd said. The new committee is now compiling evidence as to why the site should remain a protected zone in the lead up to the sale. “As a community, we need to ensure that those wetlands and zonings are protected, if not heightened,” Ms Lloyd concluded. The controversial sale is being handled by One Agency Platinum. “Quietly nestled amongst the cycle ways, boardwalks and mangroves, this curated collective of unique land spans across eight separate titles alongside the magical Davistown foreshore community,” the One Agency listing read. “On offer, is close to 47.5 acres, or almost 200,000 square metres of undeveloped land, exclusively featuring over 400 metres of picturesque waterfront reserve. “These aggregated sites offer an uncompromising, quality lifestyle for the boating and waterways enthusiast, and with endless potential development opportunities.

“What makes this opportunity so unique is how the offering has been positioned. “Currently in Davistown, undeveloped land is priced at a blended average of $650 per square metre. “There are currently no sites on the market, nor will there ever be anything of this magnitude offered again. “With a bidding guide and an estimate set at $10 million, this presents exceptional value for money, affording the opportunity for an astute investor or syndicate to secure a scenic investment. “In today’s marketplace, the land holding’s face value is in excess of $124 million, and with an annual capital growth rate of 8.09 per cent, it doesn’t take a genius to comprehend the net yield potential”, the sales listing said.

“Individual lot allocations are either currently zoned R2 or 7a for deferred matters. “A development precedent in Davistown was set in 1992 by Living Choice which built the Alloura Waters Retirement Village, which houses approximately 300 residents across 200 apartments and villas, which lies adjacent to Tidal Shoals’ primary site along the same coastal stretch. “The time has come, and with it lies the chance to purchase an almost 10 per cent landholding within a vibrant community with a relaxed neighbourly appeal just north of Sydney,” the listing read. The six parcels of land are located in Lillipilli St, Pine Ave, Kincumber Cres and Malinya Rd, and contain endangered estuarine saltmarsh.