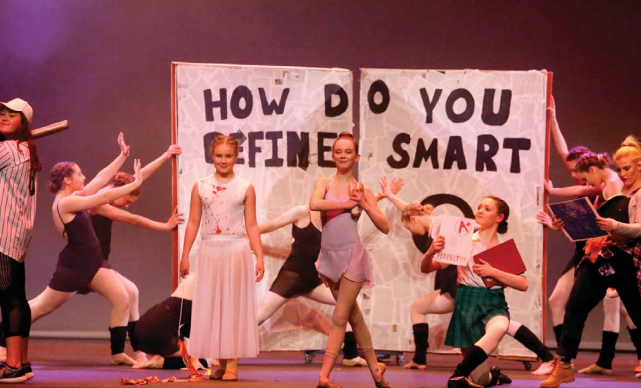 Seventy students from Tuggerah Lakes Secondary College danced their way to a place in the national final of the Wakakirri StoryDance Festival, after being crowned NSW champions, with their performance ‘Define Smart’, on Thursday, September 7.

With only seven minutes to convey a complete story, the students from Years 7-10 used movement and props to explore the notion that standardised tests, exam scores and their data, capture the essence of intelligence. The performance encouraged the audience to see the myriad of ways that aptitude and excellence can be demonstrated through careers as diverse as construction workers to prima ballerinas.

Now in its 25th year for primary aged students, 2017 was the first time the Wakakirri workshops and competition were open to secondary schools. More than 30 secondary schools across Australia joined in, comprising a total of 1,606 students. The Tuggerah Lakes team are now in the running for the Wakakirri National Story Award. Wakakirri is an Aboriginal word meaning ‘to dance’. A Wakakirri StoryDance is a 3-7 minute performance devised by a group of students who theatrically tell a story using a combination of dancing, creative movement and acting, to pre-recorded music. Schools can tell any story and use any combination of dance, acting, music, sets, props and costumes. The aim of Wakakirri is to teach students about themselves and others through creating and sharing of stories.