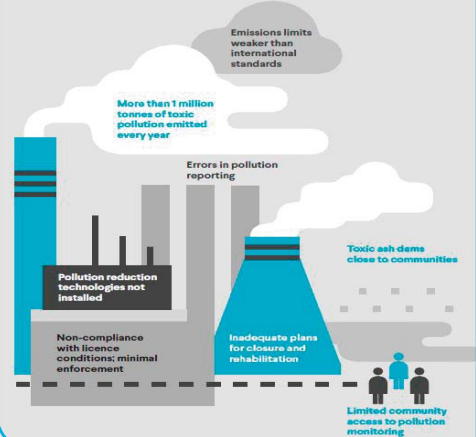 An infographic over the coal power pollution risks

The pollution licence limits set by the NSW Environmental Protection Authority (EPA) for the Vales Point and Eraring Power Stations are some of the weakest in the country, according to a new report by Environmental Justice Australia (EJA).

According to the report, Vales Point and Eraring Power Stations are two of five coal-fired power stations in NSW which are legally allowed to emit 1,500mg of nitrogen oxide per cubic metre, more than twice the limit set for Victoria’s three Latrobe Valley power stations. The report, called ‘Toxic and terminal: How the regulation of coal- fi red power stations fails Australian communities’, is the result of exhaustive research, Freedom of Information searches, surveillance of major east coast power stations, and advice from health experts and industry whistle blowers, according to EJA researcher, Dr James Whelan.

Key findings in the report included that the coal-fi red power stations, including Vales Point, emit more than 30 toxic substances and are Australia’s biggest source of fi ne particles (PM2.5), sulphur dioxide (SO2) and oxides of nitrogen (NOx), Dr Wheelan said. “These substances cause and contribute to asthma, lung cancer, heart attacks, stroke, respiratory disease, headaches and nausea in nearby communities and major cities up to 100km away,” he said. In most cases, emission limits in Australia are much less strict than those in the US, EU and China, according to Dr Wheelan.

Pollution reduction technologies that have been available for many years, and are used overseas, could signifi cantly reduce power station emissions, but are not in use in Australia, he said. “The Vales Point Power Station is licenced to emit up to 1,000 micrograms of mercury per cubic metre,” said Dr Whelan. “By comparison, power stations in the European Union and China, must keep stack emissions under 30 micrograms of mercury per cubic metre. “In the United States, the limit is 1.5 micrograms per cubic metre. “There is no air pollution monitoring within 25km of the two Central Coast power stations – Eraring and Vales Point. “Hundreds of thousands of people living near Australia’s largest power station do not know what they are breathing. “Massive coal ash dams present a risk to neighbouring communities. “Abandoned coal ash dams, left when power plants close, become a grave health hazard when they dry out and cloak communities with ash.

“Despite compelling evidence of failure to comply with pollution licence conditions, no power station in Victoria, NSW or Queensland has been prosecuted for any offence in the past 10 years, instead, they have been issued with penalty notices and piddling fines. “Australia’s air pollution laws are weak, outdated and inadequately monitored and enforced. “We need stronger national air pollution laws and enforcement now,” Dr Whelan said. Dr Wheelan said the EPA’s Regional Director, Mr Adam Gilligan, had attended a community meeting at Wyee recently and had explained that the licence conditions for Eraring and Vales Point were put in place when the power stations were new.

Dr Wheelan said that community pressure would help to make the EPA realise it needed to require higher standards on the two power stations than those required 40 years ago. “We recommend the licence limits be set according to what is set in other parts of the world and the operator should be obliged to put in place pollution-reducing technology,” he said. “We already have called on the EPA to investigate Vales Point. “The two concerns we have raised with the EPA is we don’t believe that they are accurately reporting their toxic pollution and coal is still being delivered by truck.

“Every time we ask the EPA when the conveyor system will be working again they tell us this month. “Vales Point is the only power station in the country where the coal is delivered by truck and it is one of the most urban power stations. “The community needs to know there are more toxic substances being emitted each year causing signifi cant local health impacts. “They need to join the call for the State Government and the companies to put in place the controls that are readily available to signifi cantly reduce that toxic pollution,” Dr Wheelan said. The recommendations in the report include calling upon the Commonwealth Government to commission a comprehensive and independent assessment of the health impacts of coal fi red power stations. It also calls for binding national emission standards, mandatory continuous monitoring of stack emissions reported publicly in real time, an emissions reduction program, and, loadbased licensing. Source:

Earthworks about to start for retail town centre at Warnervale